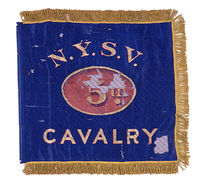 The regiment, originally known as the "Ira Harris cavalry," rendezvoused at Camp Scott, Staten island, where it was mustered into the U. S. service from Aug. 15 to Oct 31, 1861. The companies of which it was composed were principally recruited in the counties of New York, Kings, Allegany, Cattaraugus, Wyoming, Tioga, Essex and Greene.

In 1863 the regiment served in the 3d brigade, 3d division, 22nd corps at Washington; in the 1st and 2nd brigades, 3d cavalry division, Army of the Potomac; and was repeatedly in action during the year, its heaviest losses being sustained at Little River Turnpike, loss 42; at Hanover, PA, loss 54; at Hagerstown, loss 91; at Brandy Station, loss 25; and in a second action there, loss 28; at Buckland mills, loss 22.

At Hagerstown on July 8, 1863 the regiment reported that 1 enlisted man was wounded and 1 was missing.

The missing soldier was::