Of those children, those who survived him were: 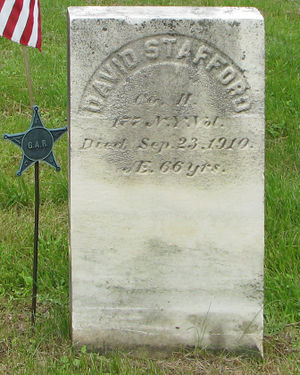 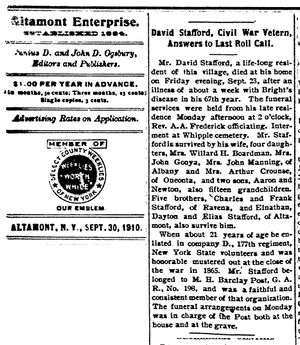 Mr. David Stafford, a life-long resident of this village, died at his borne on Friday evening, Sept. 23, after an illness of about a week with Bright's disease in his 67th year. The funeral services were held from his late residence Monday afternoon at 2 o'clock, Rev. A. A. Frederick officiating. Interment at Whipple cemetery. Mr. Stafford is survived by his wife, four daughters, Mrs. Willard H. Boardman, Mrs. John Gonya, Mrs. John Manning, of Albany and Mrs. Arthur Crounse, of Oneonta, and two sons, Aaron and Newton, also fifteen grandchildren. Five brothers, Charles and Frank Stafford, of Ravena, and Elnathan, Dayton and Elias Stafford, of Altamont, also survive him.

When about 21 years of age be enlisted in company D., 177th regiment, New York State volunteers and was honorable mustered out at the close of the war in 1865. Mr. Stafford belonged to M. H. Barclay Post, G. A. R., No. 198, and was a faithful and consistent member of that organization. The funeral arrangements on Monday was in charge of the Post both at the house and at the grave. 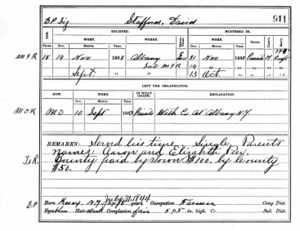