Lawrence Sitterly was from Berne.[1] He was born in about 1845[2][3] in Knox, Albany County, NY.[4] (or Princetown, Schenectady Co., NY) He was a son of Alexander and Eliza Sitterly. (Elizabeth Sperbeck) [5] He was a brother to Ira Sitterley, who also served in the Civil War.

It appears that Lawrence did not marry.[3]

Before his enlistment in the 7th HA Regiment, he worked as a farmer.[4]

After his discharge from the Civil War, Lawrence resided in Schenectady, NY.[3]

On December 5, 1911, Lawrence was admitted to a National Home for disabled Volunteer Soldiers in Bath, NY.[3] He remained there on and off for the next three and a half years, with his last discharge dated May 19, 1915.[3] His contact while in the hospital was his niece Anna Packer Kline of Montgomery County, NY.[3] 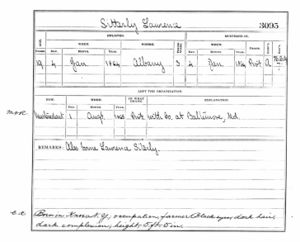