Garret Oliver was a private in the U. S. Army during World War I.

Garry Oliver, who since October has served in the U. S. Army, has been mustered out of service. He was at an army camp in Georgia, 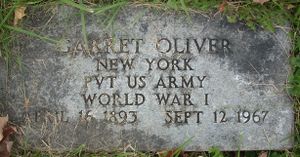 Garry Oliver passed away last Tuesday. He was a brother of Ollie Oliver and Mrs. Hannah Becker. Funeral services were held last Friday.

The marriage of Mrs. Ida McNeilly and Garret Oliver took place Monday afternoon in the parsonage of Trinity Reformed Church. Rev. George G. Seibert officiated. Mr. and Mrs. Raymond Bradt were the attendants. Mr. and Mrs. Oliver will be at home on Guilderland avenue.