Christina Grant Lendrum attended the Bell School on Route 443 near the intersection with Turner Road. She was a member of the Class of 1913 at Altamont High School[1]. .

She was employed at the Berne-Konx-Westerlo High School cafeteria until her retirement in 1974[1]. 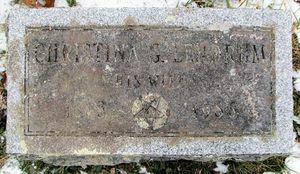 Christina Grant Lendrum Miller died April 9, 1986 at the the Guilderland Center Nursing Home (NY)[1] and was buried in Knox Cemetery[1].

Christina G. Miller died Wednesday, April 9 at the Guilderland Center Nursing Home, where she had spent the past month.

Born July 27, 1893, in Township, the youngest daughter of William and Blanche Weidman Lendrum, she grew up in Berne where she attended the Bell School on Route 443 near the intersection with Turner Road. She was a member of the Class of 1913 at Altamont High School.

December 28, 1910 she married Andrew Miller and they lived on their farm near the Bell School until his death in 1946. Later she spent several winters with her daughter Celia in Florida and she lived with flier in Berne the past several years. She was employed at the Berne-Knox-Westerlo High School cafeteria until her retirement In 1974.

In 1905 she had become a member of St. Paul's Lutheran Church where she continued to be a regular worshipper until her admission in February to St. Peter's Hospital. She served many years on the Altar-Flower Committee, and was a faithful member of the Sunday school, Missionary Society, Ladies Aid, and L.C.W.

Christina Miller was an honorary member of Foxenkill Grange 1579 and a charter member of Uhai Chapter 803 O.E.S., which she served as Electa the first two years. She received a life membership while serving as trustee recently. She was also a member of Berne Fire Auxiliary and' the Hilltowns Senior Citizens.

She was the mother of Mrs. Howard (Celia) Wright and Mrs. John (Bernice) Yarmchuk, both of Berne, and grandmother of Robert Wright of Ravena, George Wright of Berne, Barbara Christina Wright Eriksen of Berne,, Faye Yarmchuk Cornwell of Central Bridge, and Joan Yarmchuk Rorick of Pearl River. She is also survived by 10 great-grandchildren - Derek Wright of RIT, Rochester; Richard Eriksen of Berne; Brian Eriksen of Hudson Valley Community College; Katrina and Dustin Rorick of Pearl River; and Jacob Cornwell of Central Bridge — and by several nephews and nieces.

Gifts in her memory may be given to St. Paul's Lutheran Church, Berne or the Berne Fire Auxiliary.