Helen Haluska was born Monday, March 06, 1916, in New Jersey, the daughter of the late John and Mary Stemple Haluska. Their children were: 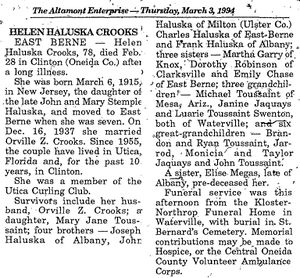 She was born March 6, 1915, in New Jersey, the daughter of the late John and Mary Stemple Haluska, and moved to East Berne when she was seven. On Dec. 16, 1937 she married Orville Z. Crooks. Since 1955, the couple have lived in Utica, Florida and, for the past 10 years, in Clinton. She was a member of the Utica Curling Club.

A sister, Elise Megas, late of Albany, pre-deceased her.

Funeral service was this afternoon from the Kloster-Northrop Funeral Home in Waterville, with burial in St, Bernard's Cemetery. Memorial contributions may be made to Hospice, or the Central Oneida County Volunteer Ambulance Corps.

A dinner party was held for the immedicate families at Hart's Hill Inn on Sept. 27. Amoung those fraom this area who attended the reception were the bride's grandfather, John G. Haluska, Mr. and Mrs. C. V. Haluska, and son, Stanley, East Berne, and Mr. and Mrs. Joseph Haluska of Albany.