Earl F. Gaige was born Tuesday February 17, 1891, the son of Willard Gaige and Cora B. Schoolcraft. His brothers and sisters were:

Mr. Gaige, a lifelong resident of the town of Knox, was a retired farmer. He was a member of the Knox Reformed church.

Earl Gaige died April 25, 1971 at his residence on Beebe Road, Knox, after a long illness. 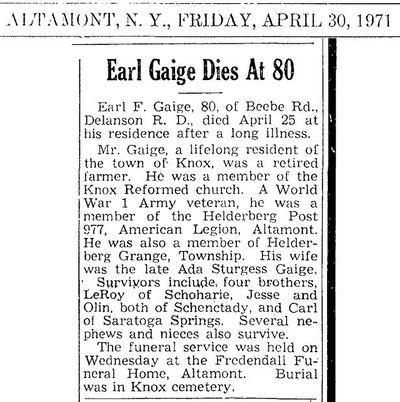 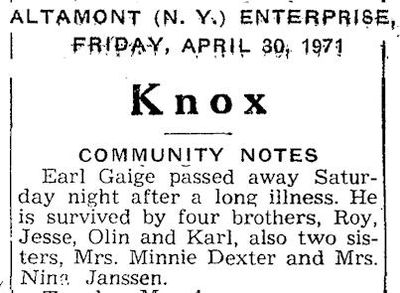 Earl F. Gaige, 80, of Beebe Rd., Delanson R. D., died April 25 at his residence after a long illness. Mr. Gaige, a lifelong resident of the town of Knox, was a retired farmer. He was a member of the Knox Reformed church. A World War I Army veteran, he was a member of the Helderberg Post 977, American Legion, Altamont. He was also a member of Helderberg Grange, Township. His wife was the late Ada Sturgess Gaige. Surveyors include, four brothers, LeRoy of Schoharie, Jesse and Olin, both of Schenctady, and Carl of Saratoga Springs. Several nephews and nieces also survive. The funeral service was held on Wednesday at the Fredendall Funeral Home, Altamont. Burial was in Knox Cemetery.

The Gaiges have met with more ill luck. Last Wednesday, Earl Gaige's barn on Beebe Rd., filled with Donald Gaige's hay, burned to the ground,. The same day a farm house formerly owned by LeRoy Gaige on Middle Raod, burned. On the same. day, Donald was taken to the hospital. May 1971 be a better year for them.