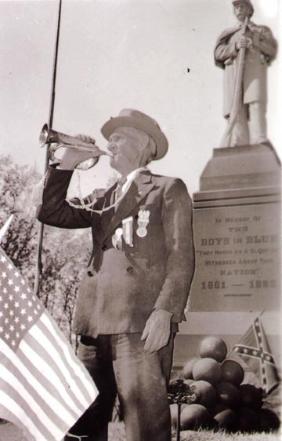 Seth was educated at the local schools in Berne.[2]

Seth married Kate M. Gifford in about 1867 in Medusa, Albany Co, NY.[3] Her name has also been recorded as Kate M. Gilford and she was the daughter of Abram Gilford.[2] They had three children:

After his first wife died, Seth married Frances M. Shattuck on August 2, 1893 in Worcester, Otsego Co, NY.[4] She was born in November 5, 1855 to Elmira and Amander Shattuck.[4] She had previously been married to Willis H. Cook, a Worcester merchant, until his death on January 4, 1887.[4] Seth and Frances did not have any children.[3]

After he mustered out from the Civil War, in July of 1865 he went to work for Moore, Wilstach and Baldwin publishers. After his marriage in 1867, he worked as a farmer in Rensselaerville. Two years later in 1869, he became a merchant there.[2]

In 1870, he moved with his former clerk, Mr. C. E. Taylor, to Worcester, Otsego County, NY. There they started "Flint and Taylor" a clothing business, which included manufacture of ready made clothes are well was tailoring..[2]

In March of 1887 he was among the jurors for the Otsego County Court in Cooperstown.[5]

Seth and his family lived on Main Street in Worcester.[2]

Seth was active in the Grand Army of the Republic, an organization of Civil War Veterans. He became the commander of the Johnson Post in Worcester.[2][6]

Seth's first wife Kate M. Gifford died in 1892 in Worcester, Otsego Co, NY and was buried there at Maplegrove Cemetery.[3]

It is not known when his second wife Frances died although it was after 1930.[3] His son G. Abram Flint lived in Fitchburg, Mass.[2]

Seth M. Flint,93, Otsego County's last Civil War veteran who claimed he sounded the bugle call signalling the end of the Civil War, died last night. Flint born in Berne Oct 7, 1847, spent most of his life in the real estate business here. He enlisted in the northern army June 11, 1862 when not quite 15 years old and served the war's last year as a bugler with General U.S. Grant.

Grant's Bugler Dies At 94 At Worcester Home. Seth M. Flint, Who Enlisted for Civil War at 15. Sounded Final Note. Witnessed Surrender of General Robert E. Lee--Otsego's Last Link With Rebellion. Taps sounded for the last Otsego county veteran of the Civil War shortly after 8 o'clock Tuesday night when Seth M. Flint, who was with General U. S. Grant, died suddenly from a heart attack. Ordered by his physician not to exert himself, Mr. Flint had been down cellar at his home at Worcester and collapsed after climbing the stairs. Until then, he had been in his usual health. He was ninety-four years old. Otsego's last intimate link with those stirring days of '61 died with Seth M. Flint. Before his eyes had passed those gigantic figures of history, Lincoln, Grant, and Lee. From his lips sounded the call, "Forward," which sent Union soldiers into a defeated South after Grant and Lee had settled the epochal peace terms which were forever to unite the states into one great union. Only a boy of fifteen when he enlisted, he saw and took part in the gigantic struggles that were Antietam, Malvern Hill, Fair Oaks, Fredericksburg, and culminated in the high tide of the Confederacy at Gettysburg. Born at Berne, October 7, 1846, a son of Joseph M. and Sabra Ann (Ticknor) Flint, Mr. Flint came of a family that had participated in all of America's wars except that with Mexico the year he was born. His great grandfather was Capt. Joseph Flint of Revolutionary war fame, and his grandfather, Asa, took part in the war of 1812. Seth Flint's son, the late Abram G., born of his first marriage, served in the First Wisconsin infantry in the Spanish-American war, and Abram's eldest son, Gifford, now of Janesville, Wisconsin, was overseas more than three years during the World War. Twice Married. Shortly after the close of the Civil war, Mr. Flint married Kate M. Gifford, daughter of Mr. and Mrs. Abram Gifford at Medusa February 6, 1867. On first returning from war service, he had been associated with Moore, Wilstach and Baldwin, New York city publishers, and after his marriage conducted his father-in-law's farm for two years. Entering mercantile business in Medusa and Rensselaerville, he remained there until 1880 when he came to Worcester, and with C. E. Taylor, a former clerk, established a clothing and furnishing goods store here. On the death of his partner, he closed out the business and engaged in real estate and insurance operations until his retirement in 1920. A lifelong member of the Baptist church, he had served as superintendent or teacher in Sunday school for seventy years. A former Mason and member of the Red Mens order, he had been commander of the Johnson post, Grand Army of the Republic, which now goes out of existence with his death. Educated in the public schools in Berne and this village, Mr. Flint had also attended the United States Military school at Carlisle, Pennsylvania. A mere boy on that far gone day in June, 1862, when he went to Albany with several other young men, he enlisted in the Fifth cavalry, formerly the Second Dragoons of which Robert E. Lee had been lieutenant colonel. Old Regiment Met Commander. Lee, and other officers in the regiment of southern birth had resigned their commissions in the Union Army and joined the Confederacy. Less than half of a decade later, Flint, a bugler boy with Lee's former regiment, was to be the first to meet him when the Southern leader surrendered. Recruiting officer at Albany on the 11th day of June was Lieut. Napoleon B. McLaughlen, who later was to rise to brevet brigadier general and whose remains now lie in Maple Grove cemetery here. Walking to Albany to take part in the great war between the states, the youth had to tell the officer that he was eighteen, and was told in turn, "you are just the boy we are looking for." Thus he became a private in the Fifth Cavalry. Rushed to the front, Flint's outfit disembarked at Harrison's Landing, Virginia, near Richmond, under shot and shell of the enemy's guns. There shots whizzed past, shells burst, and a battle raged in plain view of the raw recruits. The lad was just in time to participate (Continued on page 8) -- which is not available.

Seth Flint and his Civil War connections have been recorded in many articles and books including: