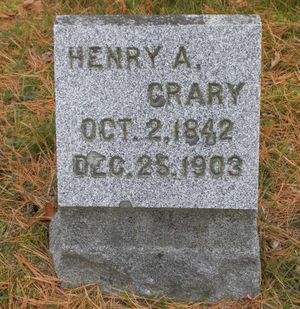 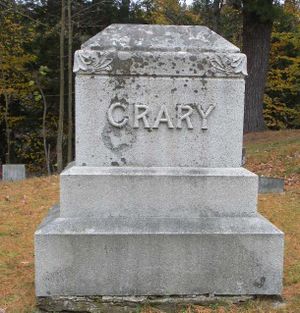 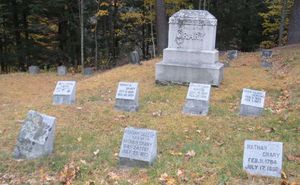 Dr. Henry Augustine Crary, of Knox, Albany county, N. Y., died on December 25, 1903, of locomotor ataxia, from which he had been a sufferer for several years, during the last five having been confined to his room and the last two to his bed.

Dr. Crary was born at Knox, the son of John Gallup Crary and Mary Spawn Crary, both natives of Albany county, He was of Scotch and English origin, his ancestors coming to America in the year 1600, some of whom settled in Connecticut and New York. His grandfather Crary came to Knox while a boy, late in 1700. They were a long-lived race, many of them living to eighty and ninety years, and in one case to the unusual age of 107 years. Dr. Crary's preparatory education was obtained at the Knoxville Academy and Union College, after which he studied medicine under the preceptorship of Dr. Sigsbee, of Knox, and later he became a student of Dr. Freeman, of Albany, and was graduated from the Albany Medical College, December 22, 1866.

While yet a student in Union College Dr. Crary enlisted in Company G. 177th Regiment, N. Y. State Volunteers, and was made sergeant of his company. He served under Capt. L. M. Filkins and went with his regiment to New Orleans and was present at the siege of Port Hudson, after which a protracted illness necessitated his return north. He was honorably discharged and mustered out of service on the tenth day of September, 1863.

After his graduation he opened an office at 41 Clinton avenue, Albany, where he practiced for a time, being made Ward Physician. Later he removed to Closter, N. J., where he practiced until the spring of 1876, when he returned to Albany, occupying the house of Dr. Swinburne in Eagle street, and the following spring he returned to Closter, N. J., where he continued to practice until 1892. On account of failing health he then removed to Knox, at which place he continued to practice until obliged to abandon work on account of the illness which gradually increased until it resulted in his death.

On the second day of June, 1870, Dr. Crary married Frances Ramsey, daughter of Hon. Joseph Ramsey, of Albany. Three children were born to them, two of whom, Henry A. Crary, Jr., and Mrs. Harry Westervelt, of Nyack, survive him. Mrs. Crary died some years ago.

Fraternally Dr. Crary was a member of the G. A. R. and the Albany Burgesses Corps.

It was my pleasure to know Dr. Crary well. He was a man of broad and liberal mind, generous in his impulses and true to his friends. By nature he was largely endowed with mental faculties of a superior order and a judgment quick to grasp the situation in emergencies and the ability to execute. Possessing these qualifications he necessarily favorably impressed those with whom he came in contact, and his friendships among the profession and the laity alike were equally strong, and consequently all sincerely regret that his life's labors are closed and we shall meet and greet him no more until that time shall come to us as it came to him, when life's fitful dream is o'er. Jesse Crounse. 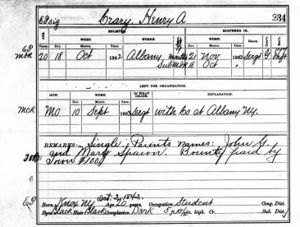 1865 Census - Veterans and Soldiers in Knox