From Berne, NY - a Helderberg Hilltown
Schools
Jump to navigation Jump to search

Visit Schools for a listing of all schools in the Hilltowns. 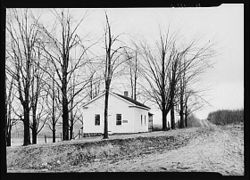 Can anyone identify this West Mountain School near Rensselaerville? According to the note on the back, at the time it was taken it was abandoned and soon to be torn down for as part of the land project that eventually became Partridge Run State Wildlife Management Area.

Public education in Berne began when the town was created in 1795, thanks to the new state legislator that appropriated $20,000 for a common school fund, of which Albany Counties share was $3,975. In late 1700s, it had two log schools, per state law.

"Two of Berne's earliest schools are described in Tenney and Howell's History of the County of Albany Both were log buildings of crude construction. One, located near the site of the area's first Lutheran Church about halfway between Berne and East Berne, was a square flat-roofed building. Another was a bit more elaborate, having a dimension of 20 feet by 20 feet, a slanting roof, three windows, and a door on wooden hinges."[1]

Since most of the people were of German origin, the written and spoken language in the schools was German until about 1800. In 1812, a resolution of progress was adopted as follows: “There shall be $500 raised in the Town of Berne for the school system.” This in itself was a very progressive action for that time in history.

By 1812 there were 21 school districts in the Town, each with its own school. That included Knox, which did not become a separate town until 1822. In 1884 $1,942.10 was spent on 831 pupils. Our Heritage points out that there are many reasons the schools were inexpensive to run:

By the middle of the 19th Century Berne was included in the 2nd District of Albany. New one-room schools were built throughout the town at locations to minimize the miles the students had to walk. The buildings were an improvement over the earlier ones, being built with clapboard siding and widows on two sides to improve ventilation and light. Usually the boys were seated on one side and the girls on the other. In 1930 the Central School District was created and a new building built in 1932 to house the students from 15 local districts. It was not until 1956 all of the present area was included in the centralized district.

All of the schools before 1932 were one-room schools.