Difference between revisions of "Berne during World War II" 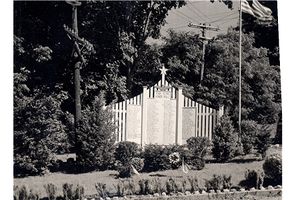 The first Berne soldier to give his life has been killed in action in Belgium. He was Pfc. James W. Swint, son of Mr. and Mrs. William J Swint. According to the war department, Private Swint, 22 whose death gives Berne its first gold service star was killed Oct. 26. He was serving with the 415 Infantry.

The son of Mrs. Raymond Cross, Kenneth Ecker was wounded in World War 11 in the battle of Iwo Jima and died aboard a hospital ship of his wounds. He was 19 years old and with the 5th Marine Division in the raising of the flag on Iwo Jima. (died 4/2/1945 Guam Medical Installation, Guam.

Private first class Clark Adams, son of Mrs Seth Adams, served 5 years in the 4th Armored Division and was wounded in the Battle of the Bulge in October, 1944. Paralyzed, he was returned home and spent his time between home and hospitals until his death on Labor Day, 1949. 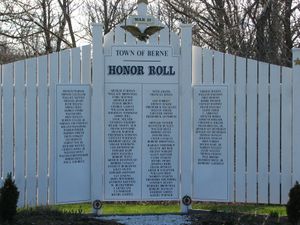 We are attempting to make a list of all hill town men and women who served. If you know someone who served, please add their name to the list. If you know more about any of them, if would be a fitting tribute to them if you would also create a biography of them. Until then, the only thing we can share with viewers of this page is their name.

Men and women from Berne who served in World War II

Veterans buried in a Berne cemetery, but not on the Memorial List