Kenneth served with the 5th Marine Division and died from wounds received in the battle of Iwo-Jima.

PFC. Ecker died in the USMC hospital on Guam on April 2, 1945. He was the son of Mrs. Alice Bellinger Cross and the late George Ecker. 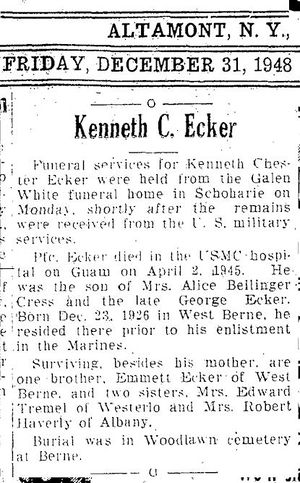 Funeral services for Kenneth Chester Ecker were held from the Galen White funeral home in Schoharie on Monday, shortly after the remains were received from the U. S. military services.

PFC. Ecker died in the USMC hospital on Guam on April 2, 1945. He was the son of Mrs. Alice Bellinger Cross and the late George Ecker. Born Dec.23, 1926 in West Berne, he resided there prior to his enlistment in the marines.

Surviving, besides his mother, are one brother, Emmet Ecker of West Berne, and Two sisters, Mrs. Edward Tremel of Westerlo and Mrs. Robert Haverly of Albany.

Burial was in Woodlawn cemetery in Berne.

Bodies of 5 Pacific War Vets Returned Home. Bodies of five Albany area servicemen who lost their lives in the Pacific theater in World War II have been returned to this country on the USAT Dalton Victory, the Department of the Army has announced. The body of one area man, Pfc. Kenneth C. Ecker, of the U.S. Marines, is among the five. His home was at West Berne. Published in the Altamont Enterprise, Page 1, 10 Dec 1948 Issue. Sons of Gold Star Mothers The son of Mrs. Raymond Cross, Kenneth Ecker was wounded in World War II in the battle of Iwo-Jima and died aboard a hospital ship of his wounds. He was 19 years old and with the 5th Marine Division in the raising of the flag on Iwo Jima. Published in the Altamont (NY) Enterprise--Albany Co. Post, Page 1, 3 Jun 1977 Issue.