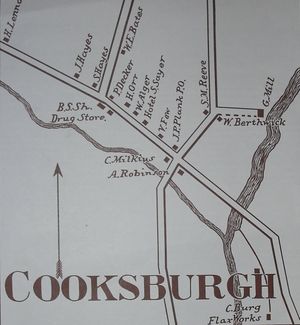 Cooksburg is a hamlet of Rensselaerville in the extreme southwest corner.

Cooksburg was settled in Daniel Youngs and Garrett Snyder. In 1840, Cooksburg was named after Thomas B. Cook, of Catskill, New York who played a leading role in bringing the Catskill and Canajoharie Railroad to the hamlet[1].

There were two grist mills in Cooksburg. One was located in a field near the intersection of Rt. 81 and Rt. 145 had three turbines in series. One was moved and is now a now a restaurant in Connecticut[2]