Difference between revisions of "Baptist Church of Preston Hollow" 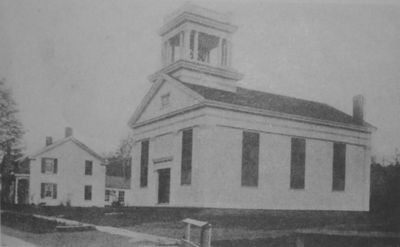 The Baptist Church of Preston Hollow was organized about 1793 but had an existence as early 1787 when the society composed of people living about Rensselaerville. It was initially called "The First Church at Rensselaerville", so named because it was the first one in the township. Churches at the time preceded villages, and like this one preceded the town, which was not separated from Watervliet until 1790. It was not until 1842 that church minutes list it under its present name of Preston Hollow.[1].

The first meetings were held in a log schoolhouse. In 1821, a church was erected situated on the bank of Fox Creek, abut one and a half miles from the village. It was framed and sided but never plastered or finished inside. In 1833, it was taken down and another built near the present schoolhouse in the village where its members worshiped until 1846 when the present church was constructed.[1]