CAVES IN THE TOWN OF KNOX 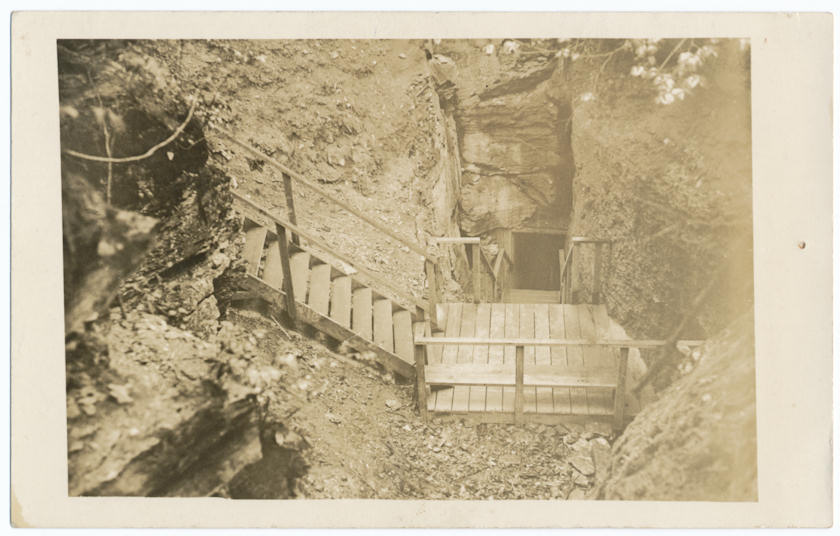 Tenney & Howell report that "a mile and a quarter north of Knoxville are two caves, supposed to be of considerable extent, which are objects of interest to many and about which cluster several picturesque but scarcely probable Legends which have been handed down to present generations of residents through their ancestors, from the early settlers."

The Cockburn Map of 1787 designates in the vicinity of Lot 47 a cave. Mr. Gregg stated that caves were unknown before the early 1900's, but David C. Palmer in Report # 10 of the Northeast Regional Organization of the Speleologic Society states that Knox Cave has reputedly been known to explorers for over 200 years. A 1935 issue of the Schenectady Union Star cites that the cave was known to white settlers and to Indian tribes before then.

The rocks in which the cave was developed was once part of the floor of an ocean. Spelunkers say crinoids, brachiopods, coral and fossils which have been found in abundance, prove that the rocks came into existence in the early part of the earths' history.

The Union Star's article also states that remains of pine torches said to have been used by Indian explorers were found, covered by a thin coating of deposit. Arrowheads and fire holes were also found. A tablet bearing strange inscriptions which may link the district with bygone ages was found by James Byhers of Toledo, Ohio, 200 feet below the level of the pound. But according to Palmer's research these inscriptions are just natural erosion marks.

"Underground Empire" by Clay Perry reports that in early Colonial times Dutch soldiers pursuing Indian marauders from Fort Orange, now Albany, 18 miles to the east, discovered that the disappearing Americans were vanishing into this cave.

Mr. Robinson, owner of the cave, affirmed that the history of the cave provided a mystery since he believed that the stone tablet discovered in 1934 had "hieratic writing" on it and would no doubt have been used by people preceding the Iroquois Indians.

The cave was uncovered on the Burdell Truax property (the present home of Stanley Busch) in 1933. It was leased to D. C. Robinson of Esperance. Lights were installed and stairs put in after blasting cleared the entrance of debris.

On May 30, 1933 the cave opened to the public for the first time and the Big Room, Dungeon, and Indian passage, the first two fissure passages east of the entrance passage and the route leading to the Gun Barrel were exhibited.

In 1935 Robinson began the construction of the Knox Roller Rink next to the cave with an assist by R. A. Stephenson. Apparently Stephenson absconded with the funds for the rink and he was never apprehended. As if this setback were not enough lightning destroyed the lighting system. But, Mr. Robinson persevered and in 1937 the rink opened for business, under the direction of Charles Zwetsch.

For many years people came from far and wide to enjoy the huge roller skating rink and also to dance on Saturday nights. The late Merlin Tubbs was the last person to lease the rink. As the fad for roller skating declined, so did the business.

In the meantime the caverns began to be explored Less and Less. The Underground Empire states the experienced spelunkers found the interior of Knox cave disappointing because they had been led to expect too much by the "somewhat imaginative descriptions" of the owner. It is further stated "that this cave has been left in a far more natural state and although well lighted and paved in rough places there has been no shifting of formations or buildings of rooms by man. The visitors enter on the second and third Levels; there are six Levels that have been traveled and more than nine parallel sets of passages.- Perry also mentions that there are rumored to be four other rooms connected with the main cavern that have not been explored yet and they might well be called the "lost caverns."

However, in the early 1930's the cave is reported to have gained such popularity that on certain weekends up to 1000 people were reported to have been given the guided tour. Mr. Mel Duell, D. S. Brown and R. L. Peugh assisted Mr. Robinson at this period. In 1937 Mr. and Mrs. Robinson bought the cave property. They lived in the house near the cave and continued its operation.

After World War II, Mr. Robinson leased the cave to the Weber Brothers who replaced the stairs and added handrails and other safety devices since they had begun to deteriorate.

The principal attraction at this time was the Rotunda Room said to be "110 feet from floor to ceiling with calcite crystals and cave onyx, fossils and other interesting wonders". Spelunkers who have visited the cave in winter when it closed during World War II found the entrance a mass of ice and almost impassable, but very beautifully decorated by the "ice flow which seemed to almost imitate the rockflow inside."

In 1953 and 1954, Cliff Forman, Robert Kronsberg, and Warren Erick operated the cave and did extensive clearing operation. Prior to this time all that was known was the section which extended to the "Broken Room". 1n 1954 a large new area was discovered. An explorer named Negley is reputed to have "discovered a 2400 foot passage beyond the Alabaster Room and a passage leading from the Fish Pool." Perry states that Mr. Negley could never find this again and ten years of exploration have failed to uncover these areas.

On October 12, 1958, Reverend Carl Hoeldthe of the Calvary Baptist Church in Albany married Robert Richter and Lennie Suenssen in the Big Room of Knox Cave. One hundred sixty guests attended. Since this was an actual work trip for the National Regional Organization of the Speleological Society, many of the guests were clad in helmets and coveralls.

In 1957-58, Perry Waldorf, Jim Proper and Jim Lane of Delanson were guides. This was the last attempt to commercialize the cave.

Mr. and Mrs. Robinson have since died. Their old house burned several years ago and in 1963 it was stated that the rink had been sold, but today it is not in use.

Spelunkers still visit the cavern. Several times the Knox Volunteer Fire Co., have had to rescue unfortunate spelunkers who were trapped temporarily deep within the earth.

Mr. Michael Narduci had a poem entitled "The Knox Cave Overature" published in Beverwyck, the Siena College Magazine. He graciously has given permission to use it in this booklet. Originally it was dedicated to Mrs. Robinson, but now he has dedicated it to all the people of Knox. A section of the poem follows.

The Big Room
Far beneath the fields, a vast room
Where echoes move like shadows,
And a bat may flit under the ceiling's arch.
Here, where boulders lie like broken walls
And sandy holes are washed by forgotten streams
Many emotions vibrate in the silence
And towering shapes merge with the darkness.


A dome climbs above the rock-littered floor,
And water dribbles down walls into gravel pools,
Over amber decorations ravaged by ignorant hands.
A gothic doorway opens into halls beyond.
Where chambers vanish into the past;
This is the entrance to the vaults of night,
The guard of the galleries of time.


Like a pharaoh's tomb, and with its mystery,
The room lies under the soil.
Never does a planet's light shine from its rocky sky,
Nor yellow moon; and there are bones here.
The wall, blackened by ancient fires,
Keeps well its old secrets:
Its face is but the dripstone,
Its eye but a clouded crystal,
And its voice but the distant echo of a falling stream.

A stone bowl holds the water,
So cold, glass-like,
And still in the dark.


And only bubbles and ripples
Ever move on
The Stygian pool.


So the water goes to a place,
Secret, unknown,
Where man cannot be.

(in a whisper)
And here, in deep silence,
Stone icicles hang, and sculptured pillars climb from the floor;
Ice-like cascades pour motionless from the walls:
The stone forms are like frozen milk.


In the dim light, glistening tricklets moisten the walls,
And the drip of icy water hangs for a moment,
Then spatters on the floor;
Only its splash breaks the silence,
And when for an instant the wet stones capture a reflection,
There is a sparkle.


Like heaps of new snow glazed the stone lies;
Frosty crystals cover the flowstone banks,
And glisten from twisted shapes that cling to the walls;
Like a cavern in ice the room is,
Hung with glassy drapes that wave in no breeze.
Never do the secret stones melt or slush:
Here the room has hidden ten thousand years.

Mr. Warner, former historian for Altamont, provides the information that the Wynd family lived near a crossroads tavern, known as Brumaghim Corners, near Knox but moved to Thompsons Lake. Lewis Wynd the father shod horses but also worked as a hired man since he had a large family consisting of three sons and two daughters.

It seems that he utilized a great deal of time by hunting and consequently stumbled on this cave. It is said that he spent many weeks removing loose rocks and debris, and with lumber that he toted upon his back through the woods built a cover for the entrance with a slanting door (like a hatchway door to the cellar) and put a padlock on it.

His purpose was to attract the summer boarders and "city folks" vacationing at Thompsons Lake by charging admission and thereby availing himself of much needed cash.

Wynd did not own this land nor did he receive permission for its use. His well laid plans met with disaster when on the Fourth of July he expected to guide his patrons through the cave but found that his entrance shed had been smashed and the cave's mouth filled full of loose rocks. He never rebuilt but legend persists that after this he began to "dig for gold or else bury his treasure". A legend prevails that in a large field of oats on the Whipple family property a large hole was discovered one day, lending credence to the idea of buried treasure. Mr. Warner states "the spot was ideal for such a yarn to grow, being close behind a cemetery.

Lewis Wynd died at the age of forty-six but legendary exploits of the younger Wynds persisted since the rest of the family had moved away.

Young William and Charles Wynd had quit school where their reputation as young ruffians made their every appearance cause for suspicion. Their apparent lack of steady employment led further to the belief that they were thieving. "It seems," states Mr. Warner, that at intervals they were even reported to the sheriff who would muster a posse and chase them, but they always eluded capture and were supposed to hide and live in this cave atop of the plateau."

1n 1887 the store and Post Office of Elam Williams in Knox was robbed. This time pursuit of the Wynd brothers was more vigorous. One brother was finally apprehended "plowing through snow drifts, physically exhausted". The other brother was discovered sitting in front of the store one morning awaiting capture.

On May 5th, 1888, the Altamont Enterprise records this information in the "Town of Knox news. "A deputy U. S. Marshall was in town to try the Wynd Case." Charles and William Wynd were tried for forced entry and convicted and sentenced.

The Legend of the Wynd brothers and the buried stolen goods remains a memento of the Wynd Cave. It is still a spot for spelunkers.

There are several other Town of Knox caves in the spelunkers repertoire which should be included even though they do not boast the saga of either Knox or Wynd Cave. There is the Knox Fossil Cave or Becker Cave off Becker Road. the Reservoir Cave, the Worlds End Sinkhole Cave, Pryzsiecki's Pit, Tenant Farm Cave, Tunnel Cave of Pleasant Valley Lane and Devil's Hole behind the Knox Cemetery.