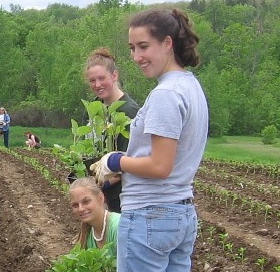 Patroon Land Farm
▪ A Garden That Feeds Many ▪

a collaboration of two not-for-profit organizations

The Patroon Land Foundation came into being in 1997 when Pauline Williman was inspired by the example of an Irish land trust. She endowed the Foundation with the portion of her family’s farm that she inherited after her mother’s death. Those 162 acres are dedicated to remain as agricultural land, devoted to relieving hunger and offering opportunities for agricultural education.

Beginning in 2001, Pauline and her brother, William Salisbury, with the help of family, friends, neighbors, and volunteers, planted and harvested the Foundation’s first crop. All of the food was donated to the Regional Food Bank of Northeastern New York to help feed hungry people.

In the spring of 2006, Pauline Williman, then eighty years old, asked the Regional Food Bank for help operating the Foundation’s farm.

The Food Bank saw the Farm as a great potential, long-term source of food. The quality and variety of crops from the Farm were superior to most of the other produce donations the Food Bank received, and with some help, production could be increased. An agreement was reached – the Food Bank hired a Farm Manager in May 2006, and the Patroon Land Farm project was launched.

How You Can Help

If you would like to support sustainable farming, alleviate hunger in our community, and educate the next generation of farmers, you can help in several ways.