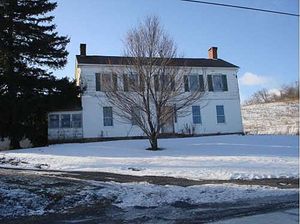 Peter M. Warner was evicted from his house on 18 July 1866 for not paying rent during the Anti-Rent War. The book Tin Horns and Calico, by Henry Christman, has a couple of pages giving great detail of the eviction.

The following is a report of the Landholders Convention, as cited in Old Hellebergh, by Arthur B. Gregg:

...the sheriff, Col. Church and an armed gang went to the premises of Amos and Mathias Warner [sons of Peter Warner] without a process and broke into his house and began to throw property out upon the public road. An Irishman, a blacksmith, living in the neighborhood came in, witnessed the devastation and objected to the removal, closing and holding the door. This was claimed as resistance. Col. Church returned to the city, called out the military and marched them to the house of the Warners, took possession of the farm, encamped there picketing the highways. The property was seized and appropriated and never did the Sheriff let go his hold until the Warners agreed to pay extortionate sum of $4,000.

The property of the Rev. Mr. Daniels, pastor of the Lutheran Church in the neighborhood and who had rented from the Warners a part of the dwelling house, shared the same fate as the Warners property. It, with his library of fine and handsomely bound books, was also cast upon the public highway in the very midst of a pelting rain storm.