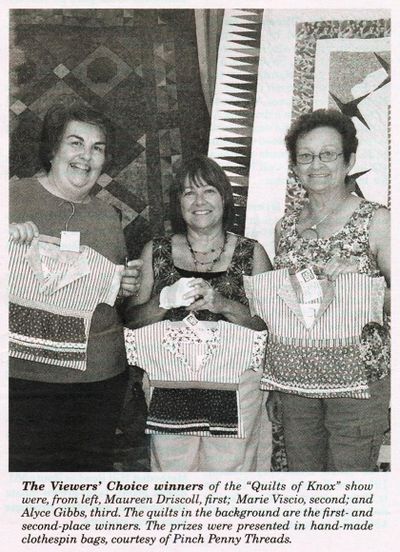 The Viewers' Choice winners of the "Quilts of Knox" show were, from left, Maureen Driscoll, first; Marie Viscio, second; and Alyce Gibbs, third. The quilts in the background are the first- and second-place winners. The prizes were presented in hand-made clothespin bags, courtesy of Pinch Penny Threads. - Altamont Enterprise - July 12, 2012 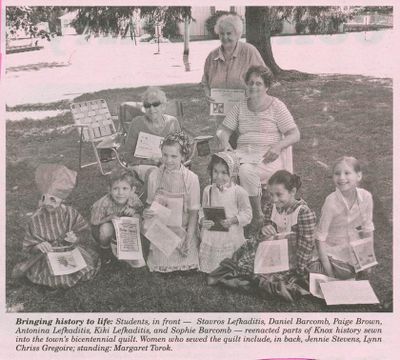 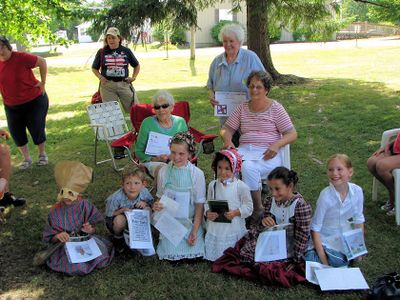 KNOX — Quilts both old and new were admired and celebrated in Knox on Sunday, July 8, with a quilt show at the town hall and a program at the Saddlemire Homestead honoring the Bicentennial Quilt.

The treasured quilt hangs in the homestead, which serves as the Knox Historical Museum.

Three of the bicentennial quilters — Jennie Stevens, Lynn Chriss Gregoire, and Margaret Torok — were honored for their quilting done in 1975-76 as part of the Knox Bicentennial Celebration.

The history of Knox came alive as student re-enactors portrayed historical residents of the town whose stories are represented on the quilt.

Stavros Lefkaditis, dressed as a Calico Indian complete with a tinhorn, portrayed Mathias Warner and related the tale of the Anti-Rent Wars.

Daniel Barcomb portrayed D.C. Robinson and told of the rediscovery of the Knox Cave and his work building a popular roller- skating rink at the cave.

Kiki Lefkaditis was Vertie Bassler, a teacher at Knox District #6 Schoolhouse. Antonina Lefkaditis was Miss Bassler's student. Sophie Barcomb was Helen Ogden who lived in the home that housed The Knox Inn and operated a teahouse known as the Crossroads in Ed Barckley's store.

The Knox Historical Society also sponsored the "Quilts of Knox" show, which was put together in five weeks by three women. Ordinarily it takes a year or two and a committee of 20 to put on a show.

Thankfully, we had many volunteers who showed up and helped with the set-up and take-down. Sixty-two quilts were displayed and 150 people visited the show.

Special thanks to the diligent glove ladies who kept a close watch on these one-of-a-kind priceless heirloom quilts.

This special exhibition and community event celebrated the uniqueness of the quilting heritage in Knox.

Visitors to the show participated in the Viewers' Choice Award by voting for their favorite quilt. First prize was awarded to quilt owner Maureen Driscoll. Her "Kaleidoscope" quilt was made by her daughter Erica Driscoll Penny.

The second prize was awarded to Marie Viscio, owner of the "Star of Sara" quilt, made and hand-quilted by Viscio, a round-robin project with Eileen Saddlemire, Katie Hahn, and Rhonda Hatfield.

The third prize was presented to Alyce Gibbs, owner of the blue and white cross-stitched, hand- quilted quilt made by Hilda Saddlemire. Special thanks to the town of Knox for use of the beautiful town-hall facility that made it possible for everyone to come to the show at no charge.

A very special thank you to our three corporate sponsors: Township Tavern, The Highlands Restaurant and Tavern, and Pinch Penny Threads.. The Knox Historical Society thanks everyone who made our show a success: our pie makers, the Knox Fire Department which loaned us tables, and everyone who donated.