From Knox, NY - a Helderberg Hilltown
Knox School District No. 3
Jump to navigation Jump to search 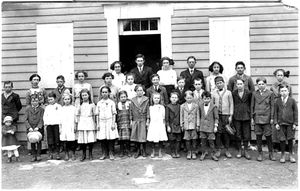 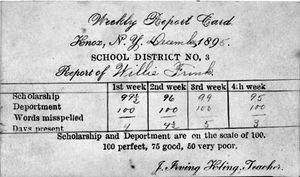 Report Card for School #3 from 1895 - Courtesy of Timothy J. Albright

In 1918 and again in 1926, Roscoe Schoonmaker was the trustee. In 1920 Arthur Hitsley served as trustee and Stanton Clute as collector. In 1925, Alvy White was trustee and the collector was Raymond Warner.

Present research has not disclosed when this schoolhouse was moved to Township, but it was subsequently bought by Duane Finch and is now [1972] owned by Leonard Tubbs who has converted it to his home. In 1932 the District was annexed to the Berne-Knox Central School System.

Another name for the area is Skunk's Misery.