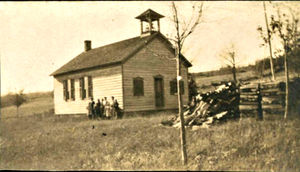 District No. 13 had 20 school age children in 1886. Fifteen children were enrolled and the daily attendance averaged out at seven. The building was valued at $400 and its library consisted of 100 books. According to Stephen Bradt, the original school building was located on the Zimmer farm (now Hoppers). The school was moved to the Bradt farm in order to provide a more central location. Jennie Bradt Rapp recalls that the site was purchased by Holly Bradt from the Charles Pitcher property in 1923. Ruth and Roy Roberts now own the land on which the school still stands. Mrs. Rapp also remembers the school's performance of Dickens' Christmas Carol to which the parents came by lantern light. She recalls the school's Harmonica Band, and sending away for the music that provided instructions how to play. Mrs. Rapp reports that Clarence Quay attended the school in 1880, together with his elder brothers, Harley and Lewis. Ona Zimmer, Jessie F. Besly, Gladys Gillis, Agatha Monaghan, and Ola Hill Pitts taught in the district from 1930 until 1940. The late Eldon Quay drove a private bus. In 1949, the district could no longer meet the expenses of a teacher's salary and bus transportation, and the school was consolidated with the Berne-Knox system.