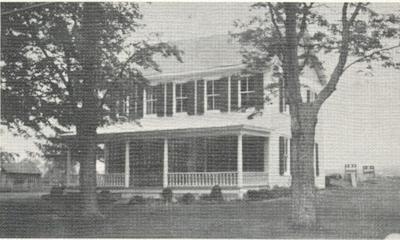 History records that until 1822, Knox was only a part of the sprawling West Manor of Rensselaerwyck. On February 28, 1822, Knox entered into history as a town with its own entity. As the year 1972 approached a small group of individuals began to be aware of its 150th birthday.

Spurred on, after a letter was written to the Town board, twenty-four interested persons met at the Knox firehouse on June 14, 1971, to explore the possibilities of a sesquicentennial celebration. From this small body, the Knox Sesquicentennial Committee was forged with Robert Stevens and Louis Saddlemire serving as co-chairmen. Bimonthly meetings formulated and materialized the sale of commemorative plates, stationery, publishing of a history book, and the manufacturing of pill boxes. The ultimate goal of the committee was the hope of providing Knox with a museum so that there would be a place to record and preserve the past, present and future history of Knox.

The success of the bake sales, dances, tagdays, fashion pageant, kite flying contest, box social, sesquicentennial dinner and a gas and steam engine show are all safely recorded but Knox reached its finest hour on July 14 and 15, 1972 with the glorious Sesquicentennial weekend planned by a sub-committee, chaired by Frederick Oettinger, assisted by the parent committee, when the entire community became completely involved. The financial success of this and all previous events reaped a harvest of over $13,000 which was used to establish the museum.

All the events of this 150th birthday celebration are recorded in newspapers, scrapbooks and in the minds and hearts of the entire town.

Members of the original Sesquicentennial Committee and the Historical Society have made yesterday's dream the reality of today.

To give thanks by naming each and every individual whose efforts have brought the museum to this point would take many pages. This must therefore serve as a heartfelt thank you to everyone who gave of their enthusiasm, time, work and gifts.

As the years pass and the museum enriches the lives of all who pass through its doors, everyone who labored will have a continuing reward.