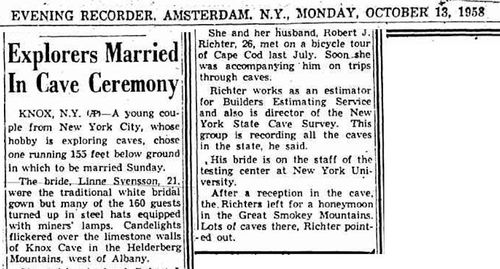 KNOX, N.Y. (AP)—A young couple from New York City, whose hobby is exploring caves, chose one running 155 feet below ground in which to be married Sunday.

The bride, Linne Svensson, 21, were the traditional white bridal gown but many of the 160 guests turned up in steel hats equipped with miners' lamps. Candlelights flickered over the limestone walls of Knox Cave in the Helderberg Mountains, west of Albany.

She and her husband, Robert J. Richter, 26, met on a bicycle tour of Cape Cod last July. Soon she was accompanying him on trips through caves.

Richter works as an estimator for Builders Estimating Service and also is director of the New York State Cave Survey. This group is recording all the caves in the state, he said.

His bride is on the staff of the testing center at New York University.

After a reception in the cave, the, Richters left for a honeymoon in the Great Smokey Mountains. Lots of caves there, Richter pointed out.