From Knox, NY - a Helderberg Hilltown
Knox Cave article May 12, 1933
Jump to navigation Jump to search 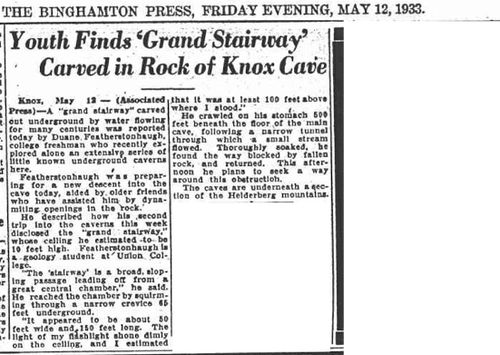 Featherstonhaugh was preparing for a new descent into the cave today, aided by older friends who have assisted him by dynamiting openings in the 'rock.'

He described how his second trip into the caverns this week disclosed the "grand stairway." whose ceiling he estimated to be 10 feet high. Featherstonhaugh is a geology student at Union College.

"The 'stairway' is a broad, sloping passage leading off from a great central chamber," he said. He reached the chamber by squirming through a narrow crevice 66 feet underground.

"It appeared to be about 50 feet wide and 150 feet long. The light of my flashlight shone dimly on the ceiling, and I estimated that it was at least 100 feet above where I stood.”

He crawled on his stomach 500 feet beneath the floor of the main cave, following a narrow tunnel through 'which a small stream flowed. Thoroughly soaked, he found the way blocked by fallen rock, and returned. This afternoon he plans to seek a way around this obstruction.

The caves are underneath a section of the Heidelberg mountains.