From Knox, NY - a Helderberg Hilltown
Kiwanis Club of the Helderbergs - Deats Elected President
Jump to navigation Jump to search 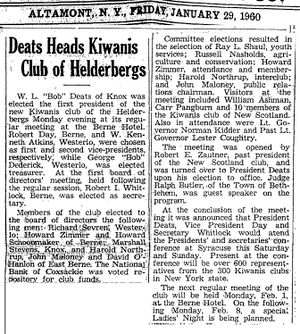 W. L. "Bob" Deats of Knox was elected the first president of the new Kiwanis Club of the Helderbergs Monday evening at its regular meeting at the Berne Hotel. Robert Day, Berne, and W. Kenneth Atkins, Westerlo, were chosen as first and second vice-presidents, respectively, while George "Bob" Dederick, Westerlo, was elected treasurer. At the first board of directors' meeting, held following the regular session, Robert I. Whitlock, Berne, was elected as secretary.

Members of the club elected to the Board of directors the following men: Richard Sevren Westerlo; Howard Zimmer and Howard Schoonmaker of Berne; Marshall Stevens, Knox, and Harold Northrup interclub; and John Maloney and David O’Hanlon of East Berne. The National Bank of Coxsackie was voted repository for club funds.

The meeting was opened by Robert E. Zautner, past president of the New Scotland club, and was turned over to President Deats upon his election to office. Judge Ralph Butler, of the Town of Bethlehem, was guest speaker on the program.

At the conclusion of the meeting it was announced that President Deats, Vice President Day and Secretary Whitlock would attend the Presidents' and secretaries' conference at Syracuse this Saturday and Sunday. Present at the conference will be over 600 representatives from the 300 Kiwanis clubs in New York state.

The next regular meeting of the dub will be held Monday, Feb. 1, at the Berne Hotel. On the following Monday, Feb. 8, a special Ladies' Night is being planned.