Kiwanis Club of the Helderbergs - 1964 Officers

From Knox, NY - a Helderberg Hilltown
Kiwanis Club of the Helderbergs - 1964 Officers
Jump to navigation Jump to search 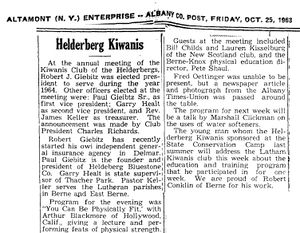 At the annual meeting of the Kiwanis Club of the Helderbergs, Robert J. Giebitz was elected president to serve during the year 1964. Other officers elected at the meeting were: Paul Gieibtz Sr., as first vice president; Garry Healt as second vice president, and Rev. James Keller as treasurer. The announcement was made by Club President Charles Richards.

Robert Giebitz has recently started his own independent general insurance agency in Delmar. Paul Giebitz is the founder and president of Heldeberg Bluestone Co, Garry Healt is state supervisor of Thacher Park. Pastor Keller serves the Lutheran parishes in Berne and East Berne. Program for the evening was "You Can Be Physically Fit,' with Arthur Blackmore of Hollywood, Calif., giving a lecture and performing feats of physical strength.

Guests at the meeting included Bill Childs and Lauren Kisselburg of the New Scotland club, and the Berne-Knox physical education director, Pete Shaul. Fred Oettinger was unable to be present, but a newspaper article and photograph from the Albany Times-Union was passed around the table. The program for next week will be a talk by Marshall Clickman on the uses of water softeners.

The young man whom the Helderberg Kiwanis sponsored at the State Conservation Camp last summer will address the Latham Kiwanis club this week about the education and training program that he participated in for one week. We are proud of Robert Conklin of Berne for his work.