Links to Histories for other Hilltowns are HERE.

The Town of Knox was established in 1822 from part of the Berne.

Early Settlement - Scoharie was settled by Palatine Refugees 1712 from what is now Germany. The earliest settlers of what is now Knox were both newer Palatine arrivals who found that the land in the Schoharie Valley was already taken, and early settlers who either could not get clear title too their land, or did not (or could not) pay the price. At that time, the wilderness land to the east in what is Knox could be had for the taking.

Settlement began before 1740. At that time it was called Helleberg (various spellings). The settlers were actually squatters, since in the 18th and most of the 19th centuries, Knox was part of the Rensselaerwyck estate. The head of the Van Rensselaer family was the Patroon who owned all the land on which the tenants in the Hudson Valley lived, and used feudal leases to maintain control of the region. Before the Revolutionary War, the patroons acted as feudal lords, with the right to make laws.

The Van Renseelaer 1787 survey map shows that occupied lots were irregularly shaped indicating they were all settled by squatters before the survey. Here is a 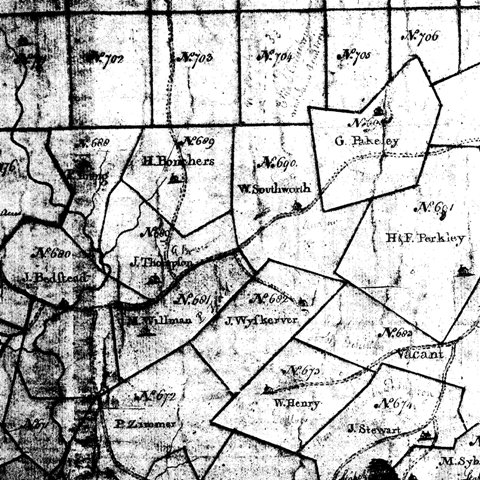 to a portion of the map. The main east west wagon road goes from Altamont to Schoharie. The wagon road to the south from the center goes to Thompson's Lake. Vacant lots are rectangular and of 120 acres each.