1960 The Beautiful Helderbergs: History of Area

From Knox, NY - a Helderberg Hilltown
1960 The Beautiful Helderbergs: History of Area
Jump to navigation Jump to search 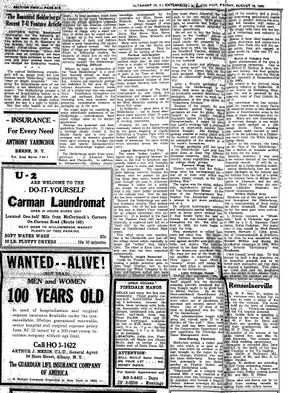 EDITOR’S NOTE: Background information for the following article has been taken from a very fine article by C. R. Roseberry in the Sunday, July 10 [1960] issue of the Albany Times-Union entitled “The Beautiful Helderbergs.” Since that article was so extensive, we have borrowed facts pertinent to the local area and have molded them into one slanted for Enterprise readers.

The named Helderberg, etymologists tell us, comes from the Low German word “Helle-berg,” meaning “clear or bright mountain.” Certainly the mountainous area of our locality is not identified by a misnomer. The Helderbergs present a picture of breathtaking beauty on a clear day and from any great distance, their sleek but simple outline against the sky is a sight to behold. But that only begins to tell the story. In local parlance, much more is implied by the words “Helderberg” than the simple definition originally supplied by the Palatine Germans. It has come to mean a great diversity of things, only a small portion of which can be stated here. Caught up in the word now are implications of facts and folklore about a most fascinating 500 square miles of upland terrain. Not the least of these are implications significant to Enterprise readers, the majority of whom live on only the northeast fringe of the vast area correctly termed “the Helderbergs.”

Where to begin a delineation of the “local Helderbergs” is a problem looming almost as large as pinpointing its specific characteristics. Science and especially geology are indebted to the area for significant discoveries; history books tell of a crucial war that was waged there. Vacationers throughout the state and northeast flock to the charming area each summer and presently considerable industry is springing up in the area. We might begin by examining an easily identifiable trademark of the Helderbergs – individualism. Each village takes on its distinct appearance. Perhaps the quaintest and least spoiled is Rensselaerville. It claims a heritage deeply rooted in the Huyck family and is very picturesque with its church’s graceful white spire reaching up through the trees and nearby Rensselaerville falls, the Helderbergs’ highest cataract. The Helderbergs sport three main gateways – an Altamont, New Salem and Clarksville. In addition to Rensselaerville, Albany county townships encompassed by the mountains are Knox, Berne, and Westerlo. They include the villages – always thought of when mention is made of the Helderbergs – of Greenville, Preston Hollow, Berne, East Berne, Knox, Westerlo, and South Westerlo. Many early settlers found the area suggestive of the Old World, and especially Switzerland. Thus the reason of the naming of Berne.

Individualism can be found in the political realm also. In what otherwise is a citadel of Republicanism, there are a few townships which habitually vote Democratic. A case in point is the Town of Berne. The mountains have always lured the adventuresome because of their many unique features, both natural and man-made. Take the example of The Gulf. Unattainable by safe roads, this sensational and deepest of the Helderberg gorges is hidden on a side of the West Mountain opening on the Switz Kill Valley. In Reidsville – ghost town of the Helderbergs – can be found abandoned stone quarries which 75 years ago were worked over by hundreds of reveling quarrymen. Probably the one feature most commonly linked to the Helderbergs by the great majority of Capital Districtites is Thacher Park with its Indian Ladder cliff. The Cliff is made of limestone, the same strata which stretches across the whole state.

The name “Indian Ladder,” so legend says, originated because Indians on the trail to Schoharie supposedly felled a tree with branches lopped down to subs and leaned it up the mountain. The legend is quite dubious, however, because the Indians, with the passion for getting things done easily, would have gone through the pass at Altamont. Because it makes for pretty tale, though, the state until recently kept a real rustic ladder proximate to the Cliffside trail. Now the ladder has been replaced by stone steps. Beneath the Helderbergs are endless limestone caverns. They beckon spelunkers. One of the best known in this area is Haile’s Cave (named for an Albany schoolman who explored it). It is located in the face of the Thacher Park cliff and incidentally, is explored each fall on a “field trip” by the earth science class at Guilderland Central High school. Two other caves rate mention. One is the Clarksville cave just off the village street which reputedly is larger and “wilder” than Haile’s Cave. The other is Knox Cave, the only one that has been exploited commercially.

Credit for Thacher Park area becoming a public preserve goes to John Boyd Thacher, heir to the Thacher Car Wheel Company in Albany and famous author and book collector. Thacher owned a summer home above Altamont (he was uncle to the late mayor and judge of the same name0. With great insight, he resolved that Indian Ladder ought to remain unspoiled for future generations. He set out to buy the farms adjacent to the “Ladder” section on which cattle grazed. Before he could create the preserve he envisioned, however, he died. Five years later in 1914, his widow, Emma Treadwell Thacher, donated 350 acres including three miles of cliff frontage as a memorial to her husband. For all intents and purposes the first “press agent” for the Helderbergs was Dr. James Hall, he first state geologist. More than anyone else, he “discovered” them scientifically. After a 50-mile geological tour through the Helderbergs in the 1830’s, Hall knew he had “found” an invaluable outdoor laboratory for geologists. He went to work on a classification of the area called the “Helderberg Division.” Because of the report, the area immediately gained fame among geologist all over the globe. Many flocked to the region including Sir Charles Lyell. Parenthetically, it might be noted that Lyell’s writings had a profound effect on nineteenth century Occidental thought. His findings in geology clashed at many points with the mystical and since long-discarded conception of the church as to the earth’s formations. Foreign geologists still are lured to the Helderbergs. Last year [1959] they came from at least five different European countries. And, from this country, many expeditions are taken by college study groups.

History records that the Helderbergs were the battleground for a war all of their own which was known, simply enough, as the “Helderberg War.” The region was the stony, undesirable unproductive portion of the old Van Rensselaer Manor. At the close of the Revolutionary War, Stephen Van Rensselaer contrived a scheme to get more production out of it. He offered land-hungry veterans and immigrants special inducements, such as seven years without rent, if they would farm the lands as tenants. He was lenient with them throughout his life. But after he died in 1839, his heirs began to crack the whip. They attempted to collect back rents and other fees. The Helderberg farmers became defiant and rose against sheriffs’ men with pitchforks and sickles. The rebellion spread to the East Manor, touching off the drawn-out Anti-Rent Wars. The Wars are one of the most curious episodes in American History. Their legacy: a legal cloud of “tenancy” with still hangs over many land titles in affected areas such as the Helderbergs.

During the depression of the ‘30s, a new sociological term “submarginal land” popped into the dictionary meaning infertile farmland that it was thought ought to be given back to Mother Nature. By the New Deal-established Resettlement Administration, submarginal farms were taken out of circulation by purchase and owners moved elsewhere. One of the 12 areas of the state so designated was the “roof of the Helderbergs.” The administration bought 4,200 acres and moved some 25 to 30 families off “the roof.” Since, much of the land has been turned over to the Conservation Department and now constitutes the Partridge Run Game Management Area. Seed-Making Flourishes Bird’s-foot trefoil, a fodder plant for cows which is as good as alfalfa, was either by accident or design brought to the region by the same German Palatines who used the name Hell-berg. Some took root, principally in two distinct patches at Preston Hollow and around Helderberg Lake. “Discovered” as a valuable food around 1935, it was classified as a mutation from the European variety by scientists who termed it Empire Trefoil. Almost overnight the Helderbergs became the seed-producing center of the country and a previously languishing agricultural region received a needed shot-in-the-arm. Many hill farmers still make a specialty of growing trefoil seed. The craggy hills have felt the impact of technology and industry in recent years. Because of their ideal location for relaying shortwave and micro-wave between New York city and the upstate points, they are capped at various points by radio and TV antenna towers.

Recent phenomenon of the area is two prospering industries. One is the Clifford B. Hanney & Son, Inc. hose reel factory, the first genuine industry in the area since the Huyck felt mill operated in Rensselaerville in the 1880s. The second is the revived stone quarrying industry at Reidsville. It is now known as Helderberg Bluestone, Inc. and is operated by the father-son team of Paul Giebitz Sr. and Jr. One conversion that has accompanied the transition of many farms into resorts. Many are now flourishing. In contrast, though, is one which can be easily spotted on a ride through Berne. There, standing gray, gaunt, and deserted is what used to be the ultimate in a Helderberg resort hotel: the White Sulpher Springs Hotel. Earlier in this century, the hotel was the “Spa of the Helderbergs.” Then a decline in business spelled bad times for the hotel. Recently, however, it was sold to the eastern district of the United Pentecostal church. It will be resuscitated as a camp-meeting center. Among the Helderberg lore are such unique sidelights as the natural gas that bubbles from the bed of a creek on the chicken farm of Milton Devenpeck at Altamont, and the old Kushaqua Hotel on whose site now stands LaSalette Seminary for Catholic Missionaries.

Mansion out the past are scattered throughout the Helderbergs, with a concentration of them being just above Altamont. Their builders for the most part were well-to-do Albanians. A famous mansion is “Woodlands,” built in Victorian Age year of 1855 by a U. S. Supreme Court Justice, Rufus Peckham. For many years it was owned by Wall Street magnate, Bernard C. Cobb, president of Commonwealth & Southern. In the firm he was associated with Wendell Willkie and during his presidential campaign in 1940, Willkie’s favorite “Gettysburg” was Woodlands. Cobb himself loved dogs. To that interest he built a dog cemetery on his beautiful grounds and as he buried each successive pet that died, he erected a headstone. Two years ago [1958] Cobb died and his daughters gave the estate to the Albany Catholic Diocese for summer use of St. Colman’s Home, an orphanage.