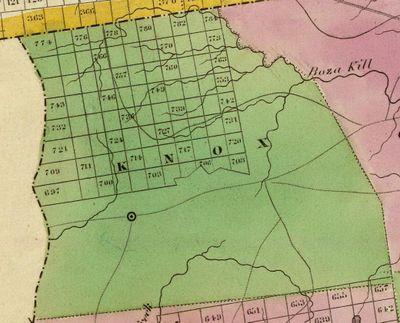 
Pub Title: An atlas of the State of New York, containing a map of the State and of the several counties ... under the superintendance & direction of Simeon DeWitt, Surveyor General, pursuant to an Act of the Legislature, and also the physical geography of the State & of the several counties & statistical tables of the same, by David H. Burr. New York, published by David H. Burr. 1829. Engravd. by Rawdon, Clark & Co. Albany & Rawdon, Wright & Co., New York.

Pub Note: This atlas is the second atlas published in the 19th century of one of the individual states in the U.S., preceded only by Mill's Atlas of South Carolina, issued in 1825, and followed closely, also in 1829, by Greenleaf's Atlas of the State of Maine (Ristow, p96). This copy is the 1st edition, second state, actually published in 1832. Howard Welsh rescued this copy which was obviously about to be broken up and disbound. When we acquired it from his estate it was completely disbound; subsequently we had it rebound and restored. The Map of the City and County of New York is dated 2nd. ed., 1832 ; Haskell 725 lists this as appearing in the 1829 ed. of the Atlas. Therefore, we can presume that there are two 1829 eds., the first state with this map dated 1829 (Haskell 721) and the second state which is this copy with the 1832 map (Haskell 725). The Map of New York State is also dated 1832. All other maps are dated 1829. Full hand painted color. Bound in half leather marbled paper covered boards with "New York Atlas" stamped in gilt on the spine.