Pictures tell the stories of the four Helderberg Hilltowns 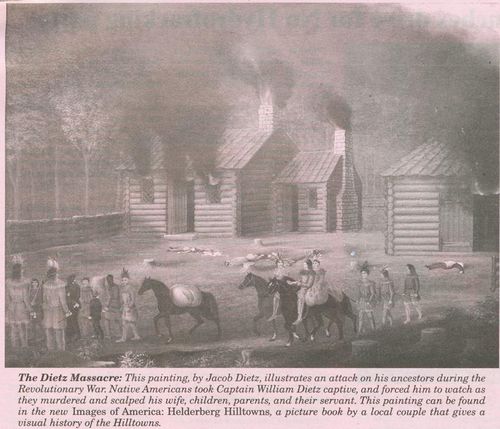 The Dietz Massacre.- This painting, by Jacob Dietz, illustrates an attack on his ancestors during the Revolutionary War Native Americans took Captain William Dietz captive, and forced him to watch as they murdered and scalped his wife, children, parents, and their servant. This painting can be found in the new Images of America: Helderberg Hilltowns, a picture book by a local couple that gives a visual history of Hilltowns. - Altamont Enterprise Article on Helderberg Hilltowns Book - July 12, 2012 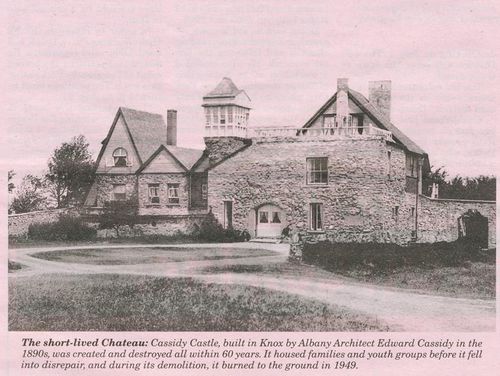 The short-lived Chateau: Cassidy Castle, built in Knox by Albany Architect Edward Cassidy in the 1890s, was created and destroyed all within 60 years. It housed families and youth groups before it fell into disrepair, and during its demolition, it burned to the ground in 1949. - Altamont Enterprise Article on Helderberg Hilltowns Book - July 12, 2012 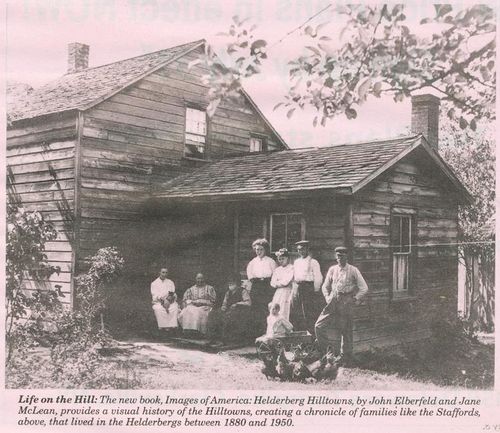 Life on the Hill: The new book, Images of America: Helderberg Hilltowns, by John Elberfeld and Jane McLean, provides a visual history of the Hilltowns, creating a chronicle of families like the &affords, above, that lived in the Helderbergs between 1880 and 1950. - Altamont Enterprise Article on Helderberg Hilltowns Book - July 12, 2012 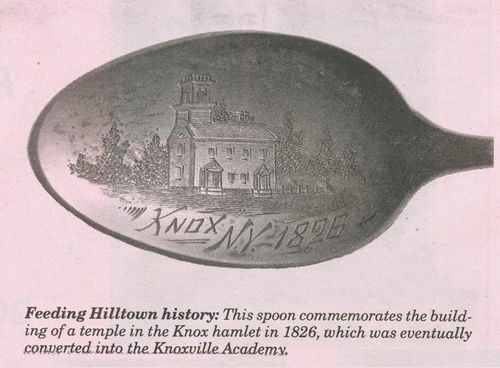 Life on the Hill: The new book, Images of America: Helderberg Hilltowns, by John Elberfeld and Jane McLean, provides a visual history of the Hilltowns, creating a chronicle of families like the &affords, above, that lived in the Helderbergs between 1880 and 1950. - Altamont Enterprise Article on Helderberg Hilltowns Book - July 12, 2012

Pictures tell the stories of the four Helderberg Hilltowns

KNOX — A couple spoke this week of their surprise when a publishing company approached them to create a picture book that illustrated the history of the Hilltowns.

"I would guess it was almost a year ago," John Elberfeld said of the message that he and his wife, Jane McLean, received from Arcadia Publishing. "We got an e-mail out of the blue, asking us if we knew anyone who'd be interested in doing this book. So, we talked it over, and we said, `We'll do it.' We have no idea why they sent it to us, but we jumped in and did it."

In the months that followed, they produced a 128-page paperback that will go on sale on Aug. 6, as part of Arcadia's Images of America series, entitled Helderberg Hilltowns. The photos span the 1880s to the 1950s.

Elberfeld and McLean are the Knox Historical Society's treasurer and secretary, respectively, and Elberfeld helped in building AlbanyHilltowns.com, an online historical database for the area.

While they have both done some technical writing over the years, this is the first book that they've produced on their own.

To accomplish this latest endeavor, the couple, both in their 60s, divided the labor: Elberfeld went searching for photos, and McLean wrote the captions.

"We actually did all the scanning ourselves," McLean told The Enterprise, "meaning John had to go around to people's houses with the scanner and computer so we could scan them, and people wouldn't have to loan them to us. So, we made appointments with people, and we went all over the four Hilltowns with the scanner. John scanned thousands of photos to get, I think, about 240 images in the book. People would bring out boxes of photos. He brought them home and showed them to me, and we'd pick the ones we wanted to use."

Elberfeld estimated that it took about four months to collect the photos that would be included in the book.

Within the book lie some sights that can no longer be seen, like Cassidy Castle, the chateau built in Knox by Albany Architect Edward Cassidy in the 1890s after a trip to France. The castle was built and destroyed all within 60 years.

"It was used by the Young Women's Summer Camp, and then by the YWCA," Elberfeld said of the chateau. "Then, it went into disrepair, and kids were playing around it. I think in the late '40s, they decided to take it down, and, in the process of taking it down, it burned."

Now, the Schenectady Boys' and Girls' Club uses the property for Camp Lovejoy.

One theme that the couple noticed among the pictures was the hardship faced by people on the Hill in the last 132 years. Elberfeld referred to a picture of the Stafford family in Knox.

"If you look at some of the older pictures, they look really worn out and beaten down," Elberfeld said. "You get the impression that it was a tough time."

And capturing that hardship in a caption was a challenge for McLean, as Arcadia limits the text underneath each photo to 75 words, she said.

"Look at West Mountain, the western portion of Berne and the highest elevation in Albany County," McLean said. "It's wild, and rugged, and isolated, and they used to have very rich farms there. But, eventually, they farmed out the land, and had erosion, and it turned into a very poor place — so poor, that the government had to relocate the families. The people were trying to make a living off this horrible land, and they just couldn't. Some of them refused to leave their land, others left because they had no choice."

She summed it up here in 74 words.

Another image shows a group of men carving massive pieces of ice from a frozen water source.

"Every town had an ice harvest in the winter, where they'd cut the ice, and use the blocks for refrigeration," McLean said. "So, I did a lot of researching on ice harvesting, how it's done, what the tools were, if people ever got killed doing it." She estimated this photo dated back to the 1930s.

The collection also contains bits of humor, like the photo of a floppy-eared dog, its tongue hanging out of its mouth, sitting on horseback.

"I'd say the hardest part was getting people to trust us to come to their houses and scan their pictures," Elberfeld said. "It took an awful lot of work."

Images of America: Helderberg Hilltowns will be available for purchase on Aug. 6 for $21.99 on several websites, including the authors' website, www.BeebeFarm.info; the publisher's web- site, www.ArcadiaPublishing.com; and www.Amazon.com.

"We spent a lot of money doing research, so we're trying to get people to buy them from us," McLean said. "If they buy it from the publisher, we only get about $1 per copy."