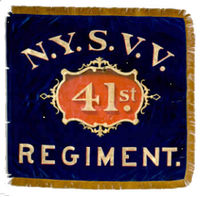 The regiment was composed of Germans recruited in New York city, except Companies G and H, which were recruited in Philadelphia, PA.