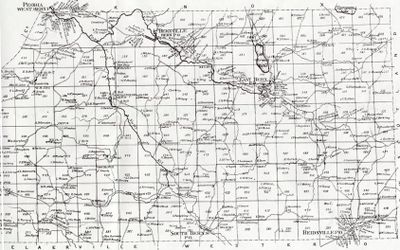 In 1866 Stone & Stewart Publishers of Philadelphia published a New Topographical Atlas of the Counties of Albany and Schenectady New York, from actual surveys by S. N. & D. G. Beers and Assistants. The Atlas has a separate map for each of the towns, and detailed maps of some of the hamlets. The maps show geographical features such as creeks and lakes, plus the location of each church, school, sawmill and individual home, along with the name of the head of household.

The grid on the 1866 map was the same as that created by William Cockburn when he made the first survey in the Helderbergs in 1786 and 1787 for Stephen Van Rensselaer III, who had inherited the land from his father a few years before. His inheritance included most of what are now Albany and Rensselaer Counties. The Rensselaer Manor had been granted to his ancestor, Kiliaen Van Rensselaer, in 1629, with the proviso that he bring over Dutch farmers to settle the land. The Van Rensselaers rented the land on long-term leases, but never sold the land. Rent was payable annually in produce and labor, typically four fat fowl, 24 bushels of good winter wheat, and a day's labor with horse and wagon.

The Van Rensselaers lived in a large Manor house in Watervliet. Bleeker's Map of the Manor of Rensselaerwyck with the Homesteads thereon, 1763, indicates that the land along the Hudson River was thickly settled, while the area just below the Helderberg escarpment was sparsely settled. The land above the escarpment is shown as wilderness, all the way to what is now the Schoharie County line. The Van Rensselaers were unaware that several dozen squatters had decades before settled upon their land on the Helderberg plateau.

In 1786 and 1787 Stephen V. R. III hired Cockburn to survey his Helderberg wilderness into rectangular, uniform-sized lots for leasing.[2] Settlers were to be recruited from the over-crowded and already-depleted farms of New England and downstate. Cockburn found almost 100 families already settled in what is now Berne and Knox. Van Rensselaer forced them to either sign leases or abandon their homesteads.

Cockburn surveyed the lots of the squatters along the boundaries of the land that they were actually farming. Each lot, whether already settled or vacant, was assigned a number to identify it for leasing purposes. The grid numbers shown on the 1866 map were the lot numbers assigned by William Cockburn at the time of his 1787 survey. A major difference between the two maps is that the 1787 map shows each irregularly shaped lot already settled, while the 1866 map is an idealized version that does not show the actual lot boundaries.

Note: The above is an excerpt from an article written for Altamont Enterprise by Harold Miller. http://www.bernehistory.org/local/berne_settlement.htm