Berne During the Civil War

Charles was a school teacher before he enlisted in the Civil War.[6] He also worked as a farmer with his father before the war and would continue in that profession for most of his life.[2][10] After his wife's death in 1906, Charles worked as a laborer in many different jobs.[10][11] 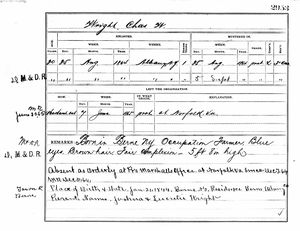 Charles was born in Berne in a small family. His father Joshua R. Wright was a farmer who owned his own farm.[10] Charles was recorded in the 1850 US Census, 1855 NY State Census and 1860 US Census living with his parents and older brother Wesley A. Wright.[10] When the 1865 NY State Census was taken, Charles was serving in the 3rd Cavalry in the Civil War however his parents recorded him with their family which now included Wesley, a widow and his two young children.[6]
When Charles returned from the Civil War, he immediately married Elmira Gifford and a year later they had their daughter Helen T. Wright.[7] In 1870 Charles and his young family were living next to his parents in Berne and Charles was a farmer who owned land.[7] By January 31, 1880, Charles had developed some health problems as he filed for an invalid Civil War pension.[14] That year when recorded in the 1880 US Census, Charles was still a farmer and living with his wife and 13 year old daughter.[8] He was recorded living in South Berne in the 1890 US Veterans Census and recorded no disabilities.[12] Charles was a member of the Charles McCulloch Post 645 GAR of Berne, NY.[11] By 1900, Charles and Elmira were still living in Berne where Charles continued to work as a farmer who owned land without a mortgage. However the couple now had help from one of Elmira's relatives Rufus Gifford (B. April 1866), a farm laborer, and his wife Margaret who lived with them.[15]
By February 15, 1901, Charles decided to retire from farming and announced that an auction was to be held on Thursday February 28, 1901 at 1 pm to sell his livestock and farm implements.[16] In about 1904, Charles and his wife Elmira moved to Lincoln Avenue in Altamont, Albany County, NY where their daughter Helen and her husband Melvin C. Crocker lived. At the time of their relocation, they were both in reasonable health, but a year later Elmira contracted a severe illness which she never fully recovered from. She then developed heart disease which she would battle for several months before her death on August 27, 1906. She was only 61 years of age.[17]
After his wife's death, Charles continued to live in Altamont on Lincoln Avenue, where he can be found in the 1910 Census living with his daughter Helen T. Wright, her husband Melvin C. Crocker and their two children Minnie W. Crocker and Stanley R. Crocker.[9] At that time, Charles recorded no occupation.[9] Ten years later in 1920, Charles, who lived alone at age 75 years, was recorded as a common laborer.

Charles' grandson Stanley R. Crocker was the executor of his estate.[18] On May 6, 1921, the house that Charles had owned on Lincoln avenue in Altamont was sold.[19]

Obituary of Mrs. Elmira Wright, Altamont Enterprise, no date given but after Aug 27, 1906

Mrs. Elmira Wright, wife of Mr. Chas. Wright, died Monday morning Aug. 27, 1906, aged sixty-one years, after an illness of several months of heart disease. The funeral occurred from her late residence on Lincoln avenue, Wednesday at 10'oclock, Rev. A. A. Frederick pastor of St. John's Lutheran church conducting the service. Interment at South Berne. Mrs. Wright is survived by her husband, one daughter Mrs. M. C. Crocker and two grandchildren. Mrs. Wright came here with her husband from their farm near South Berne about two years ago with the intention of retiring from the activities of life to live quietly and enjoy the balance of their days together. Less than a year ago she had a very severe sickness from which she never fully recovered. Mrs. Wright was a lady possessed of a loving disposition and a beautiful Christian character. She will be greatly missed in the home and by her many relatives and friends in the community.[17]

Mrs. Eseka Barber of Hudson and Miss Lutie Barber of Westerlo are visiting at the home of Melville Crocker while their sister, Mrs. Crocker, is at the hospital.

Samuel Wright, his great-grandfather, was the first of the family to settle in Berne ; he was born in 1758 and died January 9, 1831. Richard Wright, the grandfather, was born in Berne, January 28, 1793, where he was a lifelong farmer. His wife was Lydia Vincent.

Joshua B., the father of Charles Wright, was born March 28, 1816, where he also was a farmer, coming into possession of his father's homestead of 100 acres. He filled the office for some years of commissioner of highways, etc. His wife, Lucretia Wright, was born in Berne in 1820, and was a daughter of James Wright. Their children were Wesley, Charles W. and Richard (who died when five years of age). Joshua R died in 1878 and his wife in 1894.

Charles W. Wright grew to manhood on his father's farm and attended the common schools of his district and a term at the Knox Academy, and made such progress in his studies that before he was seventeen years of age he was himself a teacher of a school, which he followed winters until August 25, 1864, when he enlisted in Co. L, 3d N. Y. Cavalry, and served until the close of the war. He was in several skirmishes and raids in Virginia and North Carolina, and the winter of 1864-65 he was detailed as orderly at the provost marshal's quarters. Soon after his return home he purchased a farm and followed farming summers and teaching winters, until he had taught in all twenty-two terms. During those years he dealt to a considerable extent in clover seed and since then his farming has occupied most of his attention, his farm consisting of seventy acres. Mr. Wright has from time to time filled the office of inspector of elections, tax collector two terms, town auditor, and is now filling the office of deputy sheriff. He is a member of the Masonic fraternity, Berne Lodge, the Grand Army of the Republic, Post Charles McCullough No. 645 of West Heme, of which he was one of the charter members and of which he is senior vice-commander; he has also tilled the office of adjutant and junior vice. In 1865 he married Elmira Powell, a native of Greene county, N. Y. , and daughter of Peter H. and Lucinda (Crandall) Powell. They have one child, Helen, who married Melville C. Crocker, and has two children: Minnie and Stanley.

Twenty Years Ago - (November 28, 1902) -(South Berne) Melville C. Crocker of this place received the news of the sudden death of his brother. Miner R. Crocker, of Houston, Texas, Nov. 7. 1902, of heart disease. Mr. Crocker was born in the viciniy of RensselaervUle. He was 43 years old and leaves and wife and two daughters.

Stanley Crocker and sister, Minnie, of Altamont, were recent guests of their father, Melville Crocker, at their old home.