Thomas was born in Berne on February 12, 1820, a son of Amos Whipple and Maria Pinckney.

Thomas married in Knox at about 1838, Jane Walker who was born at about 1811 and died at about 1870. They had the following known children:

He married secondly, Almira ____. There were no children from this marriage.

Thomas Whipple, a former resident of Knox, and a brother of Alonzo Whipple of this village, died at Richmondville, Wednesday, July 1, in the 77th year of his age. The funeral was held last Friday. 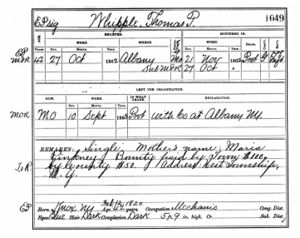