Elias Westfall was born in 1839 in Knox, Albany County, NY[1] to John Westfall and Elizabeth Gray.[2] His siblings were:

Before he entered the Civil War, Elias worked as a clerk.[1] and later he was a mason.[3]

CIVIL WAR VETERAN DIES
Elas Westfall, former resident of Settle's Hill, a veteran of the Civil war, and a well known mason by trade, died at Stuyvesant on July 4th, after a brief illness. The funeral will take place at the residence of his son-in-law, Levi R. Williams, to-day, July 6. Burial at Fairview cemetery. Peter J. Ogsbury, Charles W. Wright, John T. Stafford and Newton Ketcham, comrades in the army, will set as bearers at the cemetery. Mr. Westfall was 73 years of age and is survived by his wife. Mr. Westfall was a member of M. H. Barckley Post, G.A.R., and of St. John's Lutheran church of Altamont. 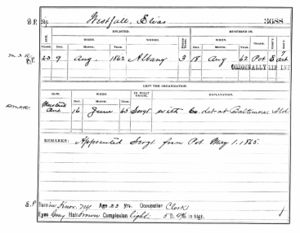 Mrs W C. Furman and daughter, of Elsmere, were recently the guests of Mrs. Furman's parents, Mr and Mrs. Elias Westfall. While here Mr. and Mrs. Westfall had a very pleasant gathering in honor of the seventh birthday of their little granddaughter, Elizabeth C. Furman, Invitations being sent to a number of her young friends whom she had met while visiting here.

—Mr. and Mr. Elias Westfall, of Settle's Hill, are expecting to leave ibis week to spend the winter with their daughter, Mrs. William Furman, in Albany. Mr. Westfall's rheumatism does not admit of his getting out but little in the winter while in the country and be hopes to have more freedom in in the city. Through his intense suffering from this aggravating disease, Elias stilt retains his happy good nature.

—Mrs. Levi Williams of Stuyvesant, returned home Wednesday after spending several days with her mother, Mrs. Elias Westfall on Settle's Hill and with her sister, Mrs. Wm. Furman, at Delmar.

John Westfall, of Chicago, an old soldier of the 7th New York Heavy Artillery, who is visiting his brother, Mr. Elias Westfall, on Settle's Hill, called on friends in the village this week. This is his first visit in the East in thirty-five years.

—Mr. John S. Westfall, of Danville, Ill., who has been visiting his brother, Mr. Elias Westfall, on Settle's Hill, for the past month, left for home on Monday the 17th inst.