Patrick Warren was born about 1844 in Ireland (or perhaps New York City), the son of Patrick Warren. His siblings were:

Patrick Warren lived in Knox in 1860 and is listed as part of the Warren family living in Knox and being in the Army in 1865. The 1865 census is difficult to read, and the information contradicts some of the data in the muster roll. But there does not seem to be an alternative. Troop G in the census might be Company G. The 13 in the census might be 113th. Or not. 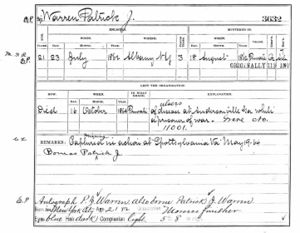