I do hereby certify that I am the widow of Paul Todd deceased, that I was married to the said Paul Todd on the sixteenth of January seventeen hundred ninety four at the town of Berne Co of Albany in the state of New York by the reverand McDonald.

That she does not remember the names of any other of the officers under whom the said Paul Todd served nor does she remember any other fact related to the said service except she has above set forth. I further certify that my age is seventy two years and six months + that I now reside + have resided in the city of Troy for two years last and upwards.

Rensselaer County ??Sally Todd above named being duly sworn says that the above statements by her subscribed is true - Sally Todd

Sworn before me this 14th day of August 1848, E. R. King Commissioner of Deeds Troy 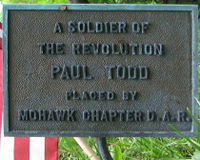