John S. Thompson was born about January 7, 1840, possibly the son of Gilbert Thompson. 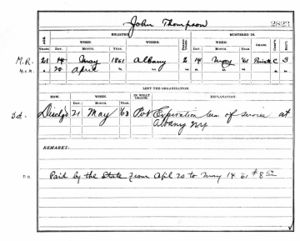 John Thompson lived in Albany in 1850 and in 1860. That is where he enlisted. In all likelihood he came to Knox after his service.