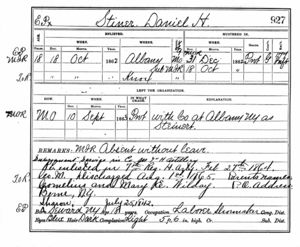 Mrs. Floyd Shufelt is passing a time with her brother, Stanley Knowless at Oneonta.—

(Daniel H. Steiner is living with Floyd J. Shufelt in 1920. Floyd's wife, Carrie, is the brother of Stanley Knowles. Carrie and Stanley are both children of Mrs. Orena Knowles from her first marriage.)