Franklin was born in Knox at about 1846, a son of Alexander Shufeldt and Amanda[1] Crary.[2] He was a brother to Edward Shufeldt and Sidney Shufeldt, who also served in the Civil War.

On August 19, 1869, at the First Lutheran Church in Albany, he married Eliza J. Buckbee who was born at about 1848 and had the following known children: [3]

Eliza died at about 1883 and Franklin married secondly, Margaret J. Burn at about 1884. They had one son, Richard B. Shufeldt. [4]

At the time of his enlistment, he was single and he was a farmer. After his marriage he was a railroad engineer 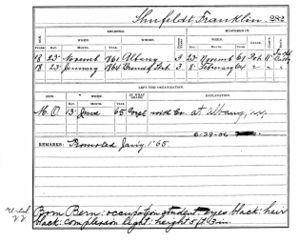 Franklin Shufeldt appears on the 1890 Veterans census for the city of Albany.