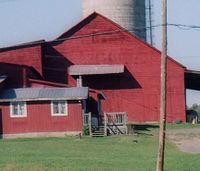 Johan Jacob Shultes (spelled Shultis by his signature on his pension file) was born on 12 May 1761 at probably, West Berne, Albany, NY. He was baptized at Schoharie Reformed Ch. His parents were Capt. Mathias Shultes and (Anna) Eva Engel, daughter of Anthony Engel and Juliana (unknown). He was one of eleven children. His siblings were:

He was educated, and became a trustee of the framed schoolhouse across Rock Road from his farm in the 1830s. It was about 1830 this Shultes family of Rock Road changed the spelling of their name to Sholtes.

He was a farmer on Lot 629 of 151 acres shown on the 1787 Van Rennselaer survey map. He drew a map of his farm abt. 1800 that shows the barn, the first house, the boundries with neighbors, and the school near his farm . He also was a Captain in the Revolutionary War along with his father Mathais and brother Mathias II. He served in the 15th Regiment of Albany County. He was garrisoned at the Old Stone Fort at Schoharie, NY. In 1832, at the age of 72 he applied for and recieved a pension under the Act of Congress for the allowed amount of $33.33 per annum.

Jacob enlisted to serve in the Revolutionary War in Schoharie and served as a private for at least 9 months in 1776 and several in 1778 and 1779 under Capt. Bogart, Colonel John Harper and Capt. Mathias Shultes. He was honorably discharged.