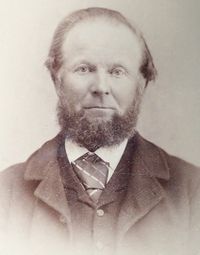 Salem M. Tallman was born on February 12, 1836, in Huntersland. He was the first of twelve children born to Jonathan Tallman and Caroline Bouton.

Salem married Salina Lounsbury, a daughter of Daniel D. Lounsbury, on February 14, 1866. The Valentine's Day ceremony took place in the U.S. Post Office in Medusa. About a year and a half later, in 1867, Salem and Salina had their only child, Fletcher D. Tallman. Salina died shortly after his birth in 1868. Salem never remarried.

Salem grew up in Huntersland working on father's farm. In 1860, when he was 21 years old he moved out and worked on a farm and living with the Reeves family in nearby Rensselaerville. Salem lived in Falls Village, Litchfield Co., CT from 1864 until early 1866. During the Civil War, wool from the Lounsbury - Tallman farm in Rensselaerville was used in the manufacture of uniforms for the Union soldiers.[1]

In addition to being a farmer and laborer, Salem also operated a cider and saw mill on the property of Charles D. Griffen on Ten Mile Creek in Rensselaerville. His son, Fletcher, would later take over the mill in 1879 and eventually purchase it.

Like many people Salem kept a diaries of daily happenings. His diaries have been transcribed and are available to read and print.

Salem died on September 16, 1917, in Medusa, at 81 years of age. The cause of his death was entero colitis. He was buried in Medusa Cemetery.

Revolutionary War soldier per a plaque by the Mohawk Chapter of the D.A.R. on his grave.[1]