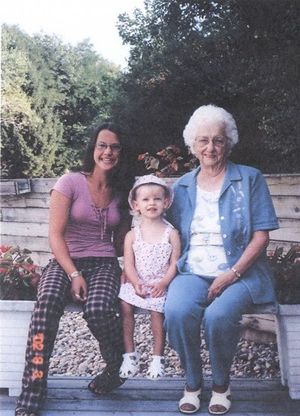 We stayed once at a camp in Robert's Grove. I had to take Harold Jr. outside to give him a bath, in the sunshine, because those camps were so cold. They were like tissue paper, no heat, no water, no nothing! I first started going to the lake when I was in high school. At that time it was the Pemberton bus line that served Ravena, and that bus would take us out to the lake. The lake is where we used to have our school picnics. There was another place out past the lake, White Sulpher Springs; we went there once in a while.

We did not build our camp. One day we were out at Rensselaerville, at the lake there. On the way home my husband wanted to stop at Warner’s lake. When my husband was a little boy, he used to camp with his family up behind Roberts Grove, and his heart always remained there. Harold wanted to drive down Dyer Rd, just to see what was down there, you could not see the camp thru the trees, but there was a for sale on the road. My husband and brother-in-law went down the steep stairs to look at the camp. We called and made an appointment to see the camp. The day we looked at the camp, my dad went along, to help us determine its condition. After looking, my husband told me to write out a check for $250.00 and we bought that camp for $5000.00. When I first started staying there, the camp was not finished off and had no water. I had a baby then, my daughter was about 6 months old, and any water I needed had to be brought up from the lake, up all those steep stairs. We had a pot bellied stove for heat and there were no ceilings, you could look right up to the rafters. I had three little kids, living by the lake, and I didn’t even know how to swim. I still can’t swim to this day. I could always count on one of my neighbors to take the kids down to the lake. When we bought the camp, there was an extra lot up on the upper road. As our family got bigger and the children got married, my husband wanted to build a duplex on that lot. I kept holding back and then when the zoneing went into effect in the seventies, the lot was no longer big enough to build on.

When we first started to stay at the lake, Roberts Grove was still in operation, it’s O’Hanlons now. We had a sign up on the road that said Roberts, so our friends could find our camp. There were many times when the children from the Jewish camp would mistake us for Robert’s store in the grove, and walk right into our camp. As I recall, they were always polite.

There were 4 camps, the Roemers, Shutters, Guertze’s and us. Every summer we would have a big clam steam. We used big garbage cans; Al and Frannie Shutter along with Bill and Lee Roemer would get all the food. We would make clam chowder the day before and have our big steam the next day. At one time there was a fish truck that came into Dyer road, and eventually we got Freihofer’s to come in. We all got together on Saturday nights to play poker, now wait till you hear how much we played for, 1 and 2- cent limits. During the day the women would play pinochle, the other 3 played more than I did, because I had the 3 kids plus my father-in-law. Pinochle was 25cents a game, not big money but it was a lot of fun. Of course there was the Lake Association Family Day picnic every year, the kids loved that.

We used to come up in the winter and walk across the ice to the camp. My poor husband only had an ice bar back in those days, to cut ice-fishing holes. There would be Harold Sr. and the two boys plus Billy Roemer, and he [Harold Sr.] would cut holes for everyone. We would have a big fire in the camp fireplace and cook hot dogs and bring them down on the ice along with hot drinks. When they got tired of fishing they would want to skate and my husband would have to shovel off a place for them. Many times we would be headed back across the ice to get to the car and we would be walking by moon light.

Roemers always had a boat in the summer and all the kids used it. One Christmas my husband had a boat made and had the initials H G C put on the bow. Harold, George and Carole. They always had that boat over by the dam, I could see them from the kitchen window, or up at the upper end catching frogs. We would leave for camp the day after school closed. We only had one car at that time, so there would be the three kids, Harold and I, my father-in law, a dog, a parakeet and all our belongings packed into that car.

I must make the point that I had the most wonderful neighbors, Lee and Bill Roemer, Al and Fran Shutter and the Guertze’s. I had no car at that time, and had to depend on them for many things. Fran Shutter loved kids, but didn’t have any of her own, but she sure took wonderful care of her neighbor’s children. She would pack lunches and take them on hikes and be gone most of the day.

It is difficult to remember everything that went on back then, but I know they were wonderful times that my family shared together. We still own and use the camp today.