Knox during the Vietnam War 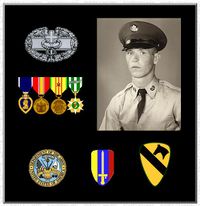 Richard John Mosley was born June 26, 1946, the son of Andrew Mosley of Delanson, the son of Charles Mosley and Gertrude LeJune. His mother was Antoinette Arcalano, the daughter of Frank B. Arcalano (1890 – 1975) and Margaret Bullard. His siblings were:

Specialist Mosley enlisted in the Army in August, 1965. Before that, he worked with the Midas Muffler Shop, after leaving Guilderland Central High school. 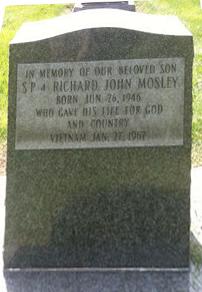 Richard John Mosley, Army air medic specialist fourth class, was killed last Friday during an air assault in Vietnam. He was 20, the son of Mr. and Mrs. Andrew Mosley of Delanson.

"When he wrote us. it letter, -- we got in the 23rd, I think -- he said he Was transferred to a new unit, but he wasn't doing anything but only guarding a bridge," said his mother Sunday night. "He didn't tell us everything, though --didn't want to get me worried."

Richard John was the oldest child of the Mosley family. The other children, Andrea, 16, Donna, 9, Stuart, 8, and Scott, seven months, live with their parents in a trailer on Knox Cave Rd.

Mr. Mosley, a teamster employed by Helm's Express,• Inc. spoke quietly of the telegrams that came Saturday. He didn't sit -- he stood and held out the small yellow telegraph forms stiffly in front of him.

It says he engaged in hostility employing small, arms fire while landing during an assault operation. The soldier who came with the priest yesterday said it was probably a rifle."

The Mosleys don't know where or exactly, how their son died, except that it was during an "air assault," Mrs. Mosley remembered that her son "was at An Khe once, but didn't mention in his last letter where he'd been transferred.

"He asked us in the last letter to write to the newspaper to say thank you for that "Operation Goodwill," she siad. "We even got a tape back from him a few eeks aog."

Specialist Mosley enlisted in the Army in August, 1965. Before that, he worked with the Midas Muffler Shop, after leaving Guilderland Central High school.

He was a member, like his father, of Teamsters Local 294.

"You know," said the father, when the facts about his soldier son's death had been gone over, "You know, he died the same day as the astronauts."

ANNOUNCE BIRTH Mr and Mrs, Andrew Mosley of Knox Cave Rd, R.D. 1, Delanson, announce the birth of their grand daughter, who was born at St. Peter's hospital, Albany, June 2, weighing in at 10 pounds, 9 ounces. Parents are Mr and Mrs. Paul Jeffers of Schenectady.

Spec. 4, Richard John Mosley, son of Mrs. Andrew Mosley, was killed January 27, 1967 in Vietnam. He was a medic and was shot running through bushes to help two wounded soldiers.