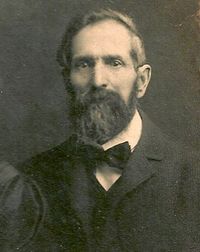 Peleg was born in Berne[1] on January 16, 1837 to Adam Reinhart and Sophia Snyder. Peleg's birth date has often been reported as being in June, January 15, and the year has also been given as 1838. In 1908, Peleg gave a sworn statement to the pension board explaining that he could not prove his date of birth. His statement reads that he “knows his age from the record kept in the old family bible owned by his grandparents, that the last time he saw said Bible was in the year 1881 on a visit home, that at that time the covers were torn off of said book and that he then took a memoranda of his birth record which showed that he was born January 16th, 1837, that the said Bible was then in possession of his mother who lived in the town of Berne Albany County - NY that his oldest brother was then living at home unmarried, that at the time he visited his old home aforesaid was to attend the funeral of his mother and that thereafter his oldest brother got married and the old home was broken up and that he can not get any trace of the old Bible. That the above is the best evidence he can give of his age.” Based on the acceptance of this statement, Peleg was given a pension increase. By the time he died in 1916, he was receiving $30 per month as his military pension.

It is interesting to note that Peleg’s statement has been supported through genealogy research done by one of his great-granddaughters, who filed the paperwork to obtain the government headstone. Another of Peleg’s great-granddaughters now owns what appears to be the same Bible described by Peleg. The Bible has no cover and has several pages of handwritten family records, including a line clearly stating that Peleg was born on January 16, 1837, just as Peleg had said in his sworn statement.

Peleg died April 19, 1916, in Schenectady, NY. His cause of death is listed as "old age". He was buried on April 22nd in Prospect Hill Cemetery in Guilderland, NY. In plot 304. According to cemetery records also buried in the plot are his wife, Jane; their son, William Reinhart age 15, their daughter, Ruth Reinhart Veeder age 28. There may also be a Clara or Claud? Reinhart age 24? buried there. This probably is their daughter-in-law, Clara, the wife of Charles Henry Reinhart. The family Bible indicates that she died on Feb 4, 1892 at age 25.

Here are some references to Peleg Reinhart found in the newspaper, The Altamont Enterprise