Before he served during the Civil War, Addison worked as a laborer.[1] 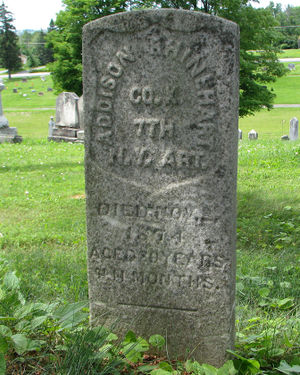 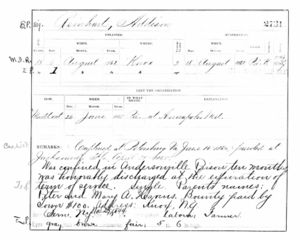 Knox - Addison Reinhart, private, 113th Regiment, Company K; enlisted August 1, and mustered August 18, 1863 ; was confined at Andersonville ten months, and at the expiration of his term of enlistment was honorably discharged.

Senora Brownell, wife of Peter S. Brownell, passed into life eternal early Sunday morning, April 18 (1948). Mrs. Brownell suffered a stroke the previous Friday and never regained consciousness. She was 72 years of age, the daughter of the late Addison Reinhart and Ida Hiltsley, and a life long resident of Berne and near vicinity. In 1894 she became the bride of Peter S. Brownell and moved to Berneville.

She was a member of the the Berne Reformed church for over 50 years and an active member in both the church and Missionary society.