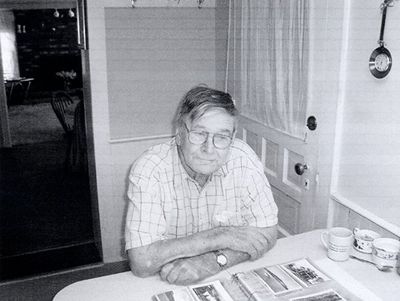 I was in Engle’s Store one day when a customer wanted to return a candy bar that had worms in it, in those days; they kept the candy and goodies over the winter as a way of saving money. Anyway, Lydia Engle told them they did not give money back for damaged goods but they were more than welcome to feed the candy bar to the pet bear.

Let’s go back to the time of Gin Mills. There used to be one where Reinholtzs is now. Arnold Mattice owned it and they had a portico you drove under to get to the boathouse. In the boathouse, they had dancing and other entertainment. I do not remember a band, but they must have had one because that was before Juke Boxes came into fashion. I don’t remember any nightlife at Engle’s, but there certainly was at Robert's Grove, which is now O'Hanlon's. They had an open-air pavilion where there would be square dances. Of course, over the hill you had Tom Hayden's Tavern, which was started by his old man. Before that, his old man ran a tavern where my farm is now on Route 157. It was called The Glenwood Inn. Before it was The Glenwood, it was a boarding house. There were 3 or 4 rooms upstairs, but no indoor plumbing in those days. It was quite a trip to go to the outhouse.

There was a general store in East Berne; run by Lillian Brownell she ran it after Nat Gallup. I don’t know what you would call us kids at the time, just a bunch of scruffins around the village I guess. There was only one General Store in the village, it was just up on top of the hill a couple buildings up from where Ginny Mann’s house is now. Of course we never had any money, but we knew how to get the biggest bang for our buck. From time to time, we would have 7 or 8 cents in our pockets. I believe at that time, nails were 3 cents a pound. We would go up to the store and order a pound of nails. Knowing dam well Bob would have to go all the way around to the back of the store to find the nails. While he was out back, we would pilfer the candy. We would load up as much as we could get our hands on. Fortunately for us, Bob never complained or said I know you are taking stuff. That was my first illegal act, pilfering candy from the General Store.

We used to sell milk around the lake in glass bottles. One of our stops was the Strevell’s, where Rockmore’s live now. My old man would take milk in and talk to the lady of the house and I would go out to what they called the wagon house to look at this gorgeous saddle they had. It was actually an army saddle and probably worth quite a lot in those days. Zeb Strevell, who was a wonderful old man, would see me looking at that saddle and stroking it. I loved that saddle and would go to see it as often as possible. One day, old man Zeb was watching me stroke the saddle. He said, “Would you like to have that saddle?” I said, “Sure, but I bet it’s very expensive!” He said, “That’s all right boy, it’s yours.” I’ll never forget that.

Jay and Lydia Engle owned the old farmhouse at the end of what is now Craig Lane. Their land was adjacent to my old mans. One day, Me, Tommy Hayden, Dick Mattice, Ray Smith, Peggy O’Connell and Jim Smith (Norm’s older brother) walked up Craig Lane. We were horsing around but not really doing anything bad. Just as we were getting ready to leave, Jim Smith heaved a rock through a pretty good-sized window in Engle’s House. There was a loud crash as glass went everywhere. We all ran as fast as we could thinking we would get away with this because no one saw us do it. Two days later, my old man who was mortal enemies with Jay Engle received a letter from Doug Hinman (the only lawyer in town). The letter stated that Lydia had witnessed a group of boys and girls breaking a window at their farm and expected to be reimbursed for the broken window. When my old man was finished reading that letter, the sparks started to fly. I was grounded for life I think. What we never knew was that Lydia was picking strawberries in the field nearby and saw the whole thing.

My father bought the East Berne Mill from a man named Ed Fisher, I think. The mill was used for grinding. Of course to run the mill, we needed water. At that time, Hart’s owned the rights to the Warner’s Lake water. They seldom used it because of the long draw down to Berne. So they allowed us to use the water from the lake. Whenever we needed water at the mill, which was very very often, my father would send me up to the lake to open the gate at about 8:00 a.m. This allowed the water to run through at an alarming rate, so they thought at the time. Whenever I would go up there, many of the association members would be there to greet me. They didn’t want the lake lowered. They would fill the slide trains with debris so that I would have to dig it out before I could open the dam. Anyway, I never backed off. This was my job. Even when they started throwing things at me, I didn’t back off.

Wagner's Hotel. Do I remember Wagner's Hotel in East Berne? Sure I do. My old man drank. Sometime in excess. Often we would go down in the truck but my best recollection is going down in the winter with the horse and cutter. There was a place, a shed I think between the hotel and Benny’s where you could drive in. He would drive in and leave me in the cutter because he didn’t want me going into the gin mill. So there I would sit hour after hour in the freezing cold. Every twenty minutes or so, my old man would send me out an ice cold coca cola, which of course was the last thing I needed sitting in the ice cold cutter. I must have been about 18 when he finally allowed me to go into the gin mill with him. Wagner's Hotel eventually burned to the ground with the bar tender, Mel Gould inside.

Once, there was a two-story building next to the Maple Inn. The bottom floor was used as the post office. It was run by my Aunt, Flavia O’Brien, Jean Smith’s mother. The family lived on the second floor. Roaming around East Berne during this period of time were a couple of guys named Sid and Al Warner. They were a little “Off” if you know what I mean. Anyway, they were all hunched over and kind of scary looking. I was deathly afraid of them. One day when I was playing on the second floor, my Aunt had gone down stairs to do some Post office business, leaving me all alone. I heard a strange noise, looked up and there was Sid Warner looking in the window at the top of the stairs.

I remember this so well because I was absolutely terrified. I ran screaming at the top of my lungs all the way downstairs to find my Aunt. My Aunt Flavia eventually moved the post office down to where Jean Smith lives now, next to the Lutheran Church.

Now a funny story, although it didn’t seem funny at the time was every year, the Lutheran Church would put on a pageant of sorts. It was presented in the church hall. One year I was in two consecutive scenes so I dressed for my first scene and when that finished, I ran next door to my aunts to get into a baseball uniform for the next number which was a chorus, singing “Take Me Out To the Ball Game”. I ran back to the church and got into line to sing. I looked down and my belt was open and my pants were slipping down. Well, I had the belt on inside out and the more I tried to buckle it, the more attention I drew to myself. By about the fourth or fifth try at buckling that belt, everyone was laughing. I was mortified. I ran out of the church crying. Never thought I’d live that one down.