By 1880, John S. Newberry is living in Junction Twp, Greene Co, Iowa with his wife Nancy.[3] He is working as a laborer and no children are recorded with the couple.[3] Ten years later John applies for his Civil War pension from Iowa.[6] However by 1906 he is back living in Steuben County, NY. [7] 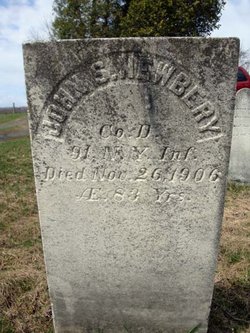 John Newberry, uncle of Mrs. M.F. Barber, from Steuben Co., is spending a few days at the Barber residence. Mr. Newberry is a veteran of the civil war, 83 years of age, and is hale and hearty for a man of his years. The Mr. Newberry on the police force at Albany is a nephew of the old soldier.

Note: Mrs. M.F. Barber mentioned in the above article was Ruth Emma Newberry (B. 1853, D. after April 4, 1930), the daughter of Nathaniel Newberry and Christina Wright, and the wife of Morgan F. Barber.