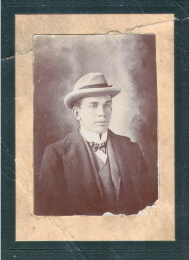 Henry was a successful farmer, butcher and speculator.

Henry married Anna B. Gibbs, daughter of Albert Gibbs and Eva Ann Ball on January 31, 1905, in the Berne. They had two children: 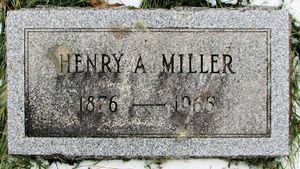 Sunday, Sept. 19, Henry Miller passed away at his home in Berne in his 90th year. In failing health for several years, his friends noted the increasing weakness after an operation resulting in loss of one leg, and the end was not expected.

He was a life-long resident of the towns of Berne and Knox, a familiar and respected presence in the locality and a loyal friend to all. He was a successful farmer and speculator and after his retirement several years ago, spent winters in Florida.

In January, 1905, his marriage to Anna B. Gibbs marked the beginning of an ideal union which was blessed with two sons, Hubert H. Miller of East Berne and Chester A. Miller of Berne, both successful farmers, who survive. His widow, Anna B. Gibbs, 13 grandchildren, and seven great-grandchildren survive.

In early life he united with St. Paul's Lutheran Church of Berne, of which he was a loyal member, having served several years on the Church COuncil. He was also a member of Berne Tent, K. O. T. M. No. 770, and several other organizations and ever an active supported of all community projects.

Funeral services were held on Wednesday afternoon from the Brunk Funeral Home in Berne with Rev. James D. Keller officiating. Burial was in Knox Cemetery.

A quite wedding was solemninized Tuesday evening. Jan. 31 (1905) at the home of A. E. Swart, when Anna B. Gibbs was united in marriage to Henry Miller, of Berne. Only a few near relatives were present. The ceremony was performed by Rev. Mr. Steackar, of Huntersland. Their many friends wish them along and happy life.

Mr. and Mrs. Henry Miller observed their 60th wedding anniversary with an open house Sunday at their home in Berne. Among the 100 guests who called during the afternoon and evening, were Mrs. Miller's sister, Mrs. Ethel McDermott; her brother, Harry Gibbs and Mrs. Gibbs, and Mrs. Andrew Miller.

Henry Miller and the former Anna B. Gibbs were united in marriage by the late Rev. Stoecker, pastor of Huntersland Methodist church, at the home of the bride's parents on West Mountain on Jan. 31, 1905. The late Miss Nellie Mathias and the late Dudley Sholtes were the honor attendants.

Both Mr. and Mrs. Miller were born in the Town of Berne and have spent their lives on various farms, all located within a few miles of their birth places. Both were active members of St. Paul's Lutheran church until advancing year limited Mr. Miller's participation. Mrs. Miller is still an active member.

Mr. and Mrs. Miller spent the winter of 1940 in California. The following winters, until 1962, they spent in Florida, staying either in St. Cloud or Fort Lauderdale.

Mr. Miller is a retired cattle dealer, butcher and farmer. At the turn of the century he delivered fresh wholesale meat and eggs to Schenectady, using a team of horses and a wagon for transportation. In 1913 he purchased a car with which he made the weekly trips. Later, the car was replaced by a truck. He is a 48- year member of Albany County Extension Service.

Mr. and Mrs. Miller have have two sons, Hubert and Chester, who are active dairy farmers. Hubert owns Cole Hill Farms, formerly the Henry Bins place. Chester, with whom the couple reside, operates Helderidge Long Acres, the former Barney White Farm. Besides their sons they have 13 grandchildren and seven great grandchildren.