Knox during the Vietnam War

Richard Warren Means was born January 16, 1943, the son of Theodore W. Means of Gallupville. He was the grandson of Louise TImmons of New York City. His siblings were:

Richard Warren Means was Seaman First Class in the U. S. Navy.

Richard Means son of Mr and Mrs. Theodore Means of Delanson R, D., former residents of Thompson's Lake has joined the U S Navy and is presently stationed at the Great Lakes training station near Chicago. 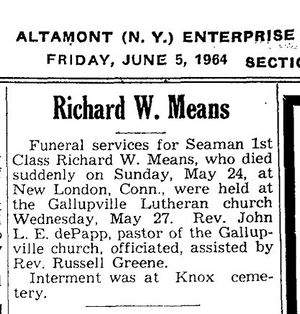 Funeral service at the Gallupville Evangelical Lutheran Church, 2 o'clock Wednesday afternoon. Friends may call at the Fredendall Funeral Home, Altamont, Tuesday from 2 to 4 and 7 to 9. Interment Knox Cemetery.

Two members took part in the 4-H horse show at the New York State Fair in Syracuse. Nancy Knoll received two blue or excellent awards and one red or good award, and Richard Means, who has" since left for service in the U. i>. Navy, won a blue award.