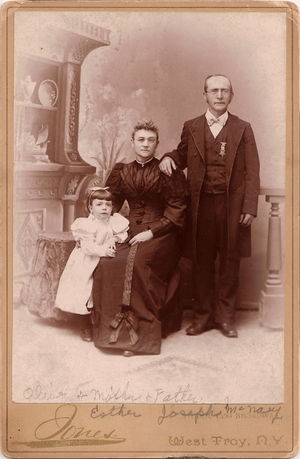 Joseph with his wife, Esther, and his youngest daughter, Olive. Joseph is wearing his GAR medal

Joseph McNary enlisted as a Private in the Civil War on 22 April 1861 at the age of 18 and reported for duty with Company F, 3rd Infantry Regiment, New York under the command of Col. Frederick Townsend. The 3d, organized at Albany, was known as the 1st Albany regiment.

On or about April 1, 1862, Joseph began to experience symptoms of Typhoid Fever and was treated on site. His condition worsened and on June 6, 1862 was transferred to the hospital at Baltimore. He received a disability discharge from Company F, 3rd Infantry Regiment New York on 9 Jun 1862 and returned to Albany. On December 19, 1864 Joseph enlisted in the 2nd Veterans Reserve Corps.

Joseph applied for and received a pension for his service on October 4, 1877.

After Joseph's return from the war, his younger brother Edwin McNary enlisted in the 11th NY Light Artillery Regiment in August of 1864.

Joseph and Esther had the following children:

Joseph was very proud of both his Civil War service, and his subsequent membership and participation in the encampments of the G.A.R..

Joseph died after a long illness from acute tuberculosis on December 13, 1903 at the age 61 years. He was buried in Albany Rural Cemetery, Menands, Albany Co., NY. On December 16, 1903 his widow applied for and received benefits until her death on May 14, 1934.